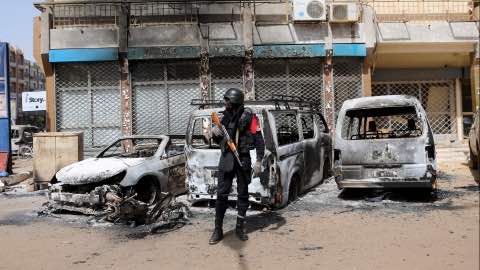 Reports from Eastern Burkina Faso in the past year point to a worrying sign that the spread of Islamist terrorism continues unabated in the West African country.

Recently, police officers killed six terrorists after a security patrol was ambushed in eastern Burkina Faso. Reports from the country in the past year point to a worrying sign that the spread of Islamist terrorism continues unabated in the West African country. Jihadis, many of whom are affiliated with al-Qaeda and other Islamist militant groups active in Mali, now operate in and sometimes control parts of the north and east of the country, many of which are labelled no-go zones due to government's inability to secure them. The east has historically played host to local militias and crime syndicates, which operate with impunity in a region largely outside of the government's influence.

Islamist terrorism has wracked the Sahel for several years now, but it is a relatively recent phenomenon in Burkina Faso. Its arrival is partly related to the fall from power of former President Blaise Compaore. Popular unrest in response to a failed bid to extend his nearly three decade-long tenure in 2014 pushed Campaore from power. The country's Western-trained presidential guard, still loyal to the former president, staged a coup to topple the transitional government in 2015. The coup ultimately failed and the presidential guard was subsequently dissolved.

The dissolution of the presidential guard left a hole in the Burkinabe security apparatus, providing an opening for jihadist groups to expand in the country. Some believe that the recent spate of attacks have been supported by former members of the presidential guard, who could see these Islamist groups as their way back into power, though no direct evidence to support this is available. Initially, terror groups affiliated with Tuareg rebels in Mali and al-Qaeda primarily operated in the north of the country, along the border with Mali. In 2016, the situation escalated as attacks led by these groups began targeting southern Burkina Faso, including the capital Ouagadougou. This year has seen the spread of Islamist terrorism to the east, along the border with Ghana, Togo, Benin, and Niger.

Both the north and east have long been neglected by the central government, which failed to extend the state security apparatus over the region and invest in the local economy. This negligence has allowed organized crime to flourish in the east making possible the expansion of jihadist groups there. The area is also home to dense forests that provide an ideal landscape for militant groups to evade the government. Compounding the problem, the Burkinabe military has credibly been accused of recent extrajudicial killings and other abuses. This undermines their efforts against jihadis, further allowing them to use the region as a launch pad for attacks in Burkina Faso and across West Africa.

Adam Valavanis is a volunteer intern in the Africa program at the Council on Foreign Relations in Washington, DC.

Photo: A soldier across the street from Splendid Hotel in Ouagadougou, Burkina Faso after security forces retook the hotel from al-Qaeda fighters who seized it in an assault that killed two dozen people from eighteen different countries. Joe Penney/Reuters