How Is the Securitization of Africa Addressing Human Insecurity? 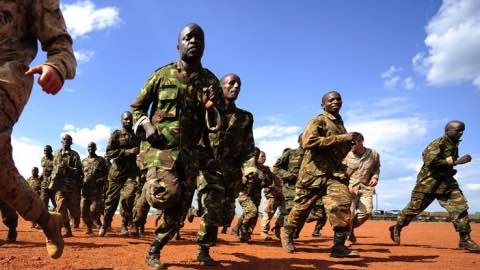 How Is the Securitization of Africa Addressing Human Insecurity?

As Agnes Wanjiru Behr sees it, the securitization of Africa has been a double-edged sword. While it has broadened people's understanding of what it means to be safe, it has failed to ensure that African leaders address the root causes of insecurity throughout the continent.

During the Cold War, the United States and the Soviet Union were largely concerned with regime stability and gaining strategic advantage over each other in a bipolar international system. Against that background, Africa was part of a global chessboard for proxy wars. The securitization of Africa—that is, the framing of relations with the continent as matters of national security—took the form of arming African client states to maintain the East–West global rivalry, with the West strategically working against the spread of communism. 1

Matters changed following a deadly attack by a small group of terrorists on the World Trade Center in 1993 shortly after the end of the Cold War, which contributed to the reshaping of domestic state security within the United States. The attacks on September 11, 2001, further redefined US identity and security with reference to a “homeland,” with far-reaching implications for the definition of the “enemy.” Before 9/11, the United States had not faced an external attack on its soil for 168 years. 2 The threat perception that emerged after 9/11 fueled new forms of securitization, directed toward an enemy from outside seeking to attack the nation at home and its allies and interests across the world.

Part of the still emerging international security narrative includes the view that weak, fragile, and failed states in the world are breeding grounds or incubators for terrorists. Arguably, African leaders have taken advantage of the opportunity to embrace “imperialism by invitation.” 3 Among other tactics, they manipulate the situation by offering military training opportunities to the highest “bidders.”

Security has traditionally been presented from a state-centric, positivist perspective, with a state seeking to maximize its power and core interests in an unstable and anarchic international system of competing states. 4 This perspective implied the state had a mandate in the face of insecurity to use extraordinary measures to counter threats. 5

Securitization goes a bit further by ascribing security threats to what leaders say it is. The notion of securitization can be traced to the Copenhagen School of security studies, which emerged following the first publication of Burry Buzan’s book, People, States and Fear: The National Security Problem in International Relations, in 1983. This school emphasizes the social aspects of security, describing it as a verbal declaration of existential threat, followed by a requirement to enact emergency measures to counter the insecurity, hence justifying actions outside the normal bounds of political procedures. 6

How Is the Securitization of Africa Changing Anything?

One of the most obvious aspects of the emerging securitization trend, particularly since the end of the Cold War, has been the securitization of development in Africa. Despite the lack of an explicit inference, some argue that overseas development assistance (ODA) has been strategically linked to securitization. 7

Following 9/11, the physical distance separating Africa and United States was no longer enough to ensure the latter of its security. Also of concern were terrorist bombings in parts of East Africa and the emergence of Al-Shabaab and Al Qaeda in the Maghreb. Western strategists noted that weak African states and porous borders aided the spread of terrorists who threatened Western and US interests on the continent. They argued that terrorists used “ungoverned spaces” as training grounds and as transit routes for seeking Western targets. 8

In 2002, in his address at the UN conference, President George W. Bush averred that the fight against poverty is not an end on its own. Rather, it is intended to give hope to the poor to resolve terrorism, and it calls for boosting aid and building capacity to secure Africa. 9 In other words, a connection is made between insecurity and poverty, and security becomes anchored in the development of African states to eliminate the threat of terrorism.

Similarly, the UK’s development policies toward Africa are tailored to reduce human suffering resulting from the continent’s underdevelopment and political mismanagement. The intended end result is removal of the inherent security threat that emanates from such suffering. Former Prime Minister Tony Blair once remarked that intervening in Africa to avert suffering would alleviate a “scar” on the world’s conscience. 10 Debatably, the securitization of Africa can alternatively be seen as less of a matter of conscience than a means of addressing perceived threats to Britain’s security and the British way of life.

Another way of looking at the securitization of Africa is to see the “war on terror” as offering a solution to the continent’s development problems if the funds are managed well. In response to the securitization trend, African countries have shifted their goals to gain aid, prioritizing terrorism over other threats. 11 Arguably, Kenya was pressured by the United States to fight against terrorism in exchange for aid. 12 The securitization of Africa has also led to a change in diplomatic tactics, consolidating them toward the development of security frontier. In Kenya, former President Daniel arap Moi joined the United States in the fight against terrorism, and former President Mwai Kibaki reaffirmed the country’s support in fighting terrorism, supposedly to attract economic and military assistance. In return, the United States gained access to Kenya’s military facilities.

The “war on terror” thus affects diplomatic frontiers, cutting across military, development, economic, and other indirectly affected sectors. Moreover, labeling African states as “fragile” and “failed” results in the establishment of Western-centric ideals of a functional state. 13 Yet African leaders securitize their interests, gains, and regimes because Africa benefits from increased funds and training from the United States and its allies. They encourage “imperialism by invitation” and the privatization of security by outsourcing a “monopoly on use of force” to the highest bidder. Observably, the East Africa Counter-Terrorism Initiative (EACTI) is funded by the United States. In Kenya, the Anti-Terrorism Police Unit (ATPU), Tourist Police Unit (TPU), National Counterterrorism Centre (NCTC), and Special Prosecution Unit (SPU) were all established with US backing. 14

The securitization of Africa has changed academic discourse in several ways by broadening the concept of “security” and its role in reshaping the relationship between the continent and global powers. And yet, in facilitating the process of securitization, African leaders avoid the real challenge of addressing the roots of human insecurity within their countries and regions. Rather unfortunately, an unintended consequence has been the radicalization of populations within some states. Following the collapse of the Somalia state, for example, and the emergence of Al-Shabaab, Somalis in neighboring countries like Kenya are being securitized; this risks further radicalization through marginalization. 15

While variables within countries have major impacts on state security, 16 they should not divert attention from regional and transnational connections to the growing challenge of human insecurity.

Africa - "How Is the Securitization of Africa Addressing Human Insecurity?"