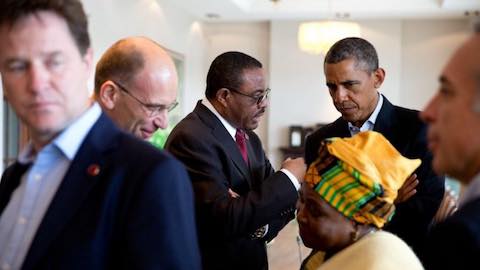 "Badessa" was a third-year engineering student in western Ethiopia in April 2014 when he and most of his classmates joined a protest over the potential displacement of ethnic Oromo farmers like his family because of the government's plan to expand the capital, Addis Ababa, into the farmland.

The night of the first protests he was arrested and taken to an unmarked detention center. Each night he heard his fellow students screaming in agony as one by one they were tortured by interrogators. "I still hear the screams," he told me later. Eventually his turn came to be interrogated. "What kind of country is it when I voice concern that my family could lose their farm for a government project and I am arrested, tortured, and now living as a refugee?"

Large-scale protests have again swept through Oromia, Ethiopia's largest region, and the response from security forces has again been brutal. They have killed countless students and farmers, and arrested opposition politicians and countless others. On January 12, the government announced it was cancelling the master plan, but that hasn't stopped the protests and the resultant crackdown.

Although the protest was initially about the potential for displacement, it has become about so much more. Despite being the biggest ethnic group in Ethiopia, Oromos have often felt marginalized by successive governments and feel unable to voice concerns over government policy. Oromos who express dissent are often arrested and tortured or otherwise mistreated in detention, accused of belonging to the Oromo Liberation Front (OLF), a group that has long been mostly inactive and that the government designated a terrorist organization.

The government is doing all it can to make sure that the news of these protests doesn't circulate within the country or reach the rest of the world. Ethiopia's allies, including governments in the region and the African Union, have largely stood by as Ethiopia has steadily strangled the ability of ordinary Ethiopians to access information and peacefully express their views, whether in print or in public demonstrations. But they should be worried about what is happening in Oromia right now, as Ethiopia — Africa's second most-populous country and a key security ally of the US — grapples with this escalating crisis.

This may prove to be the biggest political event to hit Ethiopia since the controversial 2005 elections resulted in a crackdown on protesters in which security forces killed almost 200 people and arrested tens of thousands .

Although the government focuses its efforts on economic development and on promoting a narrative of economic success, for many farmers in Oromia and elsewhere economic development comes at a devastating cost. As one Oromo student told me "All we hear about is development. The new foreign-owned farms and roads is what the world knows, but that just benefits the government. For us [Oromos] it means we lose our land and then we can't sustain ourselves anymore."

It has become almost impossible for journalists and human rights monitors to get information about what is happening, especially in smaller towns and rural areas outside Addis Ababa.

Ethiopia is one of the most restrictive environments for independent investigation, reporting, and access to information, earning the country a top-10 spot in the global ranking of jailers of journalists. For the past decade, the government has limited access to information by regularly threatening, imprisoning, and prosecuting individual activists, bloggers, and journalists and sending a clear public message that the media must self-censor and that dissent or criticism of government policy will not be tolerated.

Independent media have dwindled--more than 70 journalists have fled the country since 2010 and five of the last independent publications closed down before the May elections. Meanwhile the state-run media parrot the government line, in this case claiming that the Oromo protesters are linked to "terrorist groups" and "anti-peace elements" who are "aiming to create havoc and chaos."

Very few international journalists are based in Ethiopia. Those who have attempted to cover events on the ground since the protests began have braved threats and arrest, but these are a few lone voices.

Given restrictions on local and international media, you might think that ordinary citizens, local activists, and nongovernmental organizations would fill the gaps and document the events in Oromia. But Ethiopia's human rights activists and independent groups have been crushed by draconian legislation and threats, and even ordinary people are often terrified to speak out. People who dare to speak to international media outlets or independent groups have been arrested. The government taps phone lines and uses European-made spyware to target journalists and opposition members outside the country.

Since the protests began, the restrictions have become even harsher. Authorities have arrested people, including health workers, for posting photos and videos or messages of support on social media. The state-run telecom network has also been cut in some areas, making it much more difficult to get information out from hotspots.

Radio and satellite television outlets based outside Ethiopia, including some diaspora stations, play a key role disseminating information about the protests within Oromia, as they also did in 2014 during the last round of protests. Last year numerous people were arrested in Oromia during the protests merely for watching the diaspora-run Oromia Media Network (OMN).

The government has frequently jammed foreign stations in the past, violating international regulations in the process. When the government is unable to jam it puts pressure on the satellite companies themselves. Throughout the protests government agents have reportedly been destroying satellite dishes.

Yet despite the clear efforts to muzzle voices, information is coming out. Some protesters are losing their fear of expressing dissent and are speaking openly about the challenges they are facing. Social media plays a key role in disseminating information as people share photos and videos of rallies, of bloodied protesters, and of expressions of peaceful resistance in the face of security forces using excessive force.

In the coming days and weeks Ethiopia's friends and partners should condemn the use of excessive force by security forces that is causing tragic and unnecessary deaths. But they should also be clear that Ethiopia needs to ensure access to information and stop disrupting telecommunications and targeting social media users. The world needs to know what is happening in Oromia--and Ethiopians have a right to know what is happening in their country.