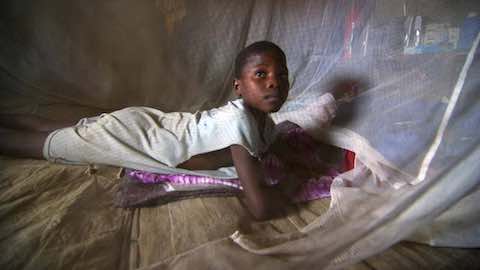 More than a quarter of people in Sierra Leone - at least two million - suffer from malaria, which accounts for a fifth of the country's child deaths

Millions of insecticide-treated bed nets are being delivered to protect people from malaria in the West African nations of Guinea-Bissau and Sierra Leone, where the mosquito-borne disease is one of the biggest killers, aid agencies said.

The countries' health ministries are working with United Nations agencies and local partners in a drive to ensure every household receives at least one bed net in the coming weeks.

"This is not just a distribution drive but also a mass information campaign," said John James, representative for the United Nations Children's Fund (UNICEF) in Sierra Leone.

"Teams will be going door-to-door, and using social media and radio to raise awareness ... the goal is to reach every last house," James told the Thomson Reuters Foundation by phone.

More than a quarter of people in Sierra Leone - at least two million - suffer from the disease, which accounts for a fifth of the country's child deaths and four in 10 of its hospital admissions, according to the World Health Organization (WHO).

Yet the number of new malaria cases in the country dropped by almost a third between 2010 and 2015, the biggest reduction of the disease in West Africa, Abu Bakarr Fofanah, Sierra Leone's minister of health and sanitation, said in a statement.

Malaria is the leading causing of death in Guinea Bissau - accounting for almost a sixth of all deaths, the U.N. says.

"Mosquito nets are the most effective barrier against malaria and can make the difference between life and death," said Aygan Kossi, the WHO representative in Guinea Bissau.

The world has made huge strides against malaria since 2000, with death rates plunging by 60 percent and at least six million lives saved globally, according to the WHO.

However efforts to end one of the world's deadliest diseases - which kills around 430,000 people a year - are under threat as mosquitoes become increasingly resistant to measures such as insecticide-treated bed nets and anti-malarial drugs.

Ghana, Kenya and Malawi will pilot the world's first malaria vaccine from 2018, offering it for babies and children in high-risk areas as part of real-life trials, the WHO said in April.