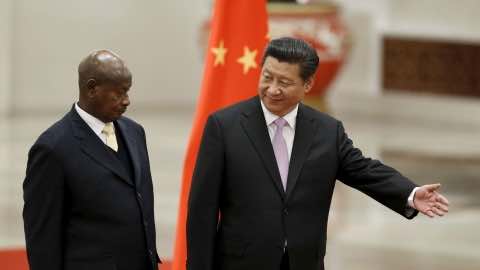 The recent move to eliminate presidential term limits in China is music to the ears of many African leaders uninterested in transitioning out of power, and a blow to emerging African governance norms.

Coming at a time when the United States lacks both the appetite and credibility to promote good governance, President Xi's power grab adds a new dimension to the appeal of the "Chinese model" for some African leaders, and strengthens the headwinds faced by those working to entrench democratic institutions.

From Burundi to Uganda to Cameroon, many African leaders have been resisting term and age limits on their tenures, altering constitutions if necessary and personalizing executive power. "Third termism" has been something of a contagion, and is often justified with arguments about how consistent leadership is required for stable and transformative development. Now China's own internal dynamics may provide new legitimacy to this trend.

To be sure, talk of a U.S.-Chinese rivalry in Africa is often overstated and rarely illuminating, but the appealing timing of the Xi's move is undeniable for would-be despots in part because of the weakened capacity of the United States, the most vocal external opponent of third termism, to promote an agenda that champions democracy and governance. Sins of omission like leaving senior diplomatic posts unfilled, self-inflicted wounds like President Trump's reported vulgar characterization of African states, and dissonance generated by the president's declared admiration and affinity for authoritarian leaders have caused the United States to recede in relevance when it comes to this battle of ideas.

Of course, African advocates for democracy, transparency, and respect for civil and political rights are by no means dependent on the United States or any other external actor for support or leadership. Just over a year ago, West African states banded together to insist on an orderly transition in The Gambia when the long-serving president, to his surprise, lost the election. The people of Burkina Faso rose up in protest when confronted with Blaise Compaoré's plan to scrap term limits and ultimately drove him from office. Right now in the Democratic Republic of the Congo, where the sitting President's last term expired in December 2016, activists are risking their lives to insist on long-overdue elections and a changing of the guard at the top. The government of Botswana, which has a solid record of vocal support for democratic norms, recently weighed in with surprisingly direct language urging Kabila to go. But adding the potential endorsement of "leadership for life" to the already formidable Chinese development model and commercial presence on the continent makes a lonely struggle even harder for these African voices. As one longtime democracy activist recently put it, "it's hard to build a successful movement when feeling so isolated and exposed."

Photo: Ugandan President Yoweri Museveni and Chinese President Xi Jinping attend a welcoming ceremony at the Great Hall of the People in Beijing March 31, 2015. Museveni has been in power since 1986 and oversaw the removal of presidential term and age limits. Kim Kyung-Hoon/Reuters