African Leaders Hailed for Progress in Fight Against Malaria 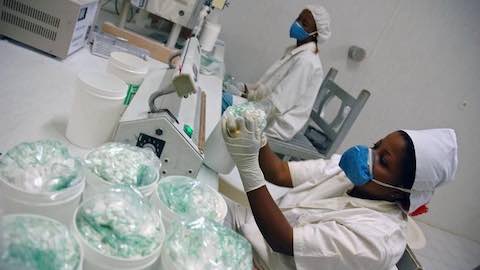 African Leaders Hailed for Progress in Fight Against Malaria

Some of Africa's poorest countries won an award for the progress they have been made towards eliminating malaria, a disease that still kills a child on the continent every two minutes.

Botswana, Cape Verde, Comoros, Democratic Republic of Congo, Ethiopia, Swaziland and Uganda achieved a reduction in the incidence of malaria of 40 percent or more between 2010 and 2015, the African Leaders Malaria Alliance (ALMA) said.

Joy Phumaphi, executive secretary of ALMA, said a significant reduction in three countries with some of the highest burdens of malaria in Africa - DRC, Ethiopia and Uganda - showed what could be achieved with political commitment, sufficient funding and sound measures to control the disease.

"We're turning the tide on malaria in Africa," she said as the ALMA Awards For Excellence were awarded during a summit of the African Union (AU) to the seven countries and to Chad for its leadership in fighting the disease.

"If we keep focused on key interventions to fight malaria and apply them consistently we can win the fight against the disease but we must remain focused," she told the Thomson Reuters Foundation.

Key anti-malaria measures recommended by the World Health Organisation (WHO) include providing insecticide-treated bednets to every household and spraying homes with insecticides.

"If you do that consistently and across more than 80 percent of the population it dramatically reduces the incidence and mortality of malaria," Phumaphi said.

The distribution of rapid diagnostic tests to community health workers and training them to test for malaria as soon as someone comes to them with a fever had also proved successful in the winning countries, she said.

Another factor is improved surveillance of malaria-affected communities and data collection, she added.

The WHO has said Botswana, Cape Verde, Comoros and Swaziland are on track to eliminate malaria by 2020, surpassing a goal set by ALMA, a coalition of African heads of state and governments, to achieve a malaria-free Africa by 2030.

Malaria mortality rates have dropped 62 percent in Africa since 2000 in all age groups and by 69 percent among children under five, according to ALMA.

Despite the progress in fighting malaria, Africa still has the highest number of people affected by malaria.

Africa - "African Leaders Hailed for Progress in Fight Against Malaria"