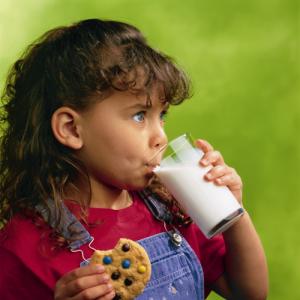 Here are five things you should know about your kids and milk:

Milk contains nine essential nutrients and vitamins, including protein, vitamins A, D, and B-12, calcium, potassium, phosphorus, riboflavin, niacin, zinc and magnesium. Children who drink milk tend to have "superior" overall nutrient intakes compared with children who don't drink milk, according to a study released last year by researchers at Environ International Corp., the University of Vermont, and the National Dairy Council.

Yet only a third to a half of American children and adolescent boys consume the government-recommended number of dairy servings, and fewer than one in five adolescent girls meets the recommendation.

Adolescents should drink three 8-ounce glasses of reduced-fat or skim milk (or equivalent products, such as yogurt) daily.

Many parents don't know whether their kids should drink whole milk, 2 percent, 1 percent, or fat-free.

The American Academy of Pediatrics has long recommended whole milk, usually 3.5 percent to 4 percent fat, for children up to age 2 because saturated fats are needed for brain development.

"Eighty percent of brain development occurs in the first two years of life, so you want the fat at that point," says Frank R. Greer, a professor of pediatrics at the University of Wisconsin School of Medicine and Public Health and chairman of the AAP's nutrition committee.

For kids over the age of 2, it's best to serve reduced-fat milk (either 1 or 2 percent).

"That's primarily because kids get lots of fat in their diets. And milk, though it has lots of nice nutrients in it, you don't need as a source of fat," Greer says.

Not all toddlers should drink whole milk

Because obesity is a risk factor for heart disease and often is accompanied by cholesterol problems, the pediatrics academy now recommends low-fat milk (no more than 2 percent fat) for 1-year-olds for whom weight or obesity is a concern, Greer says. That new advice is aimed at 1-year-olds who are already overweight, have overweight parents, or have a family history of heart problems. Very young children are increasingly getting fats from sources other than milk.

Obesity is a serious health concern for children and adolescents, according to the Centers for Disease Control and Prevention. The level of obesity among children aged 6 to 11 more than doubled in the past 20 years, going from 6.5 percent in 1980 to 17 percent in 2006. The rate among 12- to 19-year-olds more than tripled, increasing from 5 percent to 17 percent; for children aged 2 to 5 years, it increased from 5 percent to 12.4 percent.

Limiting children and teens' access to flavored milk may only lead to the undesirable effect of cutting nutrient intake.

Flavored milk is better than none at all, even though it has more sugar and slightly higher calorie content than unflavored milk.

It's a nutrient-rich package providing the same nine essential nutrients as plain milk. Each 8-ounce serving of milk --plain or flavored -- provides 300 mg of calcium, which is a fourth of the daily calcium requirement for children.

A 12-ounce servicing of apple juice, by comparison, contains 192 calories, and 12 ounces of lemon-lime soda contains 148 calories, without the nutrients in milk.

[ Check Out Kids Should Drink Milk, Even If It Is Chocolate ]

Even lactose-intolerant kids may be able to stomach some milk

The AAP advises parents to not give up on feeding dairy products to lactose-intolerant children and teens.

Roughly 20 percent of U.S. children have some degree of intolerance to lactose, the sugar naturally found in milk.

Yet lactose intolerance is often mild enough that affected kids can consume at least some milk and dairy products.

"If your child is going to have a lactose-intolerance problem, it's usually identified as a problem in the first five years," Greer says.

Certain ethnic and racial groups are more likely to suffer from the condition, including blacks, Hispanics and some Asians, he adds.