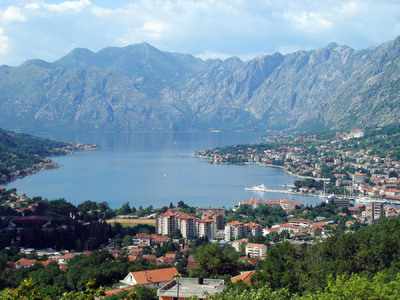 There's a buzz among travelers that humble little Montenegro is becoming a new Mediterranean hotspot. Once part of Yugoslavia and then part of Serbia, this tiny mountainous nation on the Adriatic achieved independence only recently, in 2006. This summer my film crew and I set out to capture the country for a public television show.

For me, rugged and forested Montenegro -- tucked away in the Balkans -- used to evoke the fratricidal chaos of a bygone age. It made me think of a time when fathers taught their sons "your neighbor's neighbor is your friend" in anticipation of future sectarian struggles. My recent visit changed my view. My impressions -- of impressive infrastructure improvements, a welcoming tourist trade, well-educated young people, and an enthusiasm for Europe -- left me feeling the country is on an upward trajectory. Still, the Montenegrin road is bumpy.

Montenegro has a pretty coast but the country is pretty light on sights. I'm fond of Cetinje, the scruffy but historic former capital. Tourists flock to the Budva Riviera, Montenegro's best stretch of sandy beaches, with the famous resort peninsula of Sveti Stefan.

Probably the most dramatic stretch of its Adriatic coastline is the Bay of Kotor and its delightful town of Kotor. People love to call the bay "fjord-like." Too many people who say "fjord-like" have never really seen a fjord. If you've been to Norway, you know it's rare that something routinely described as "fjord-like" actually is. But the Bay of Kotor is worthy of the description.

The tourist board put my film crew in an "emerging hotspot" designer hotel on the Bay of Kotor. It was so elite and exclusive that I expected to see Idi Amin poolside. (Actually, he's dead ... but I thought it would be cool if they had a blow-up version of him just parked next to the pool on a lounge chair.)

The hotel, open just a month, was a comedy of horrible design. We felt like we were the first guests. My bathroom was far bigger than many European hotel rooms -- but the toilet was jammed in the corner. I had to tuck up my knees to fit between it and the sink cabinet. A big Jacuzzi tub for two dominated the room. I am certain there wasn't enough hot water available to fill it. I doubt it will ever be used, except for something to look at as you're crunched up on the toilet.

When we left the glitz of Kotor, the country stretched out before us -- a basin defined by a ring of dark mountains, Montenegro's heartland. Exploring the poorest corner of any European country can be eye opening -- but Montenegro's is more evocative than most.

We came to a village that looked like it had no businesses at all. Then a man took us into a big, blocky, white building resembling a giant Monopoly house. He opened the door and we stepped inside, under tons of golden ham aging peacefully. It was a smokehouse -- jammed with five layers of hanging ham hocks. Our Montenegrin friend stoked up his fire, filled the place with smoke, and we filmed. More industry than you realize hides out in sleepy villages.

I spoke with some of the locals about their experiences growing up in Yugoslavia (which broke apart in the 1990s). They have generally good memories of the times. Marshal Tito (its strong-arm dictator who didn't always follow Moscow's lead) is remembered in a single phrase: "He said 'No' to Stalin." Not all the bonds have been cut. People in most of the former Yugoslavia speak what used to be called Serbo-Croatian (or Croato-Serbian, depending on your ethnicity). Today the languages are all essentially the same but, as required by each new country's constitution, they are called Bosnian, Montenegrin, Serbian, and Croatian.

Despite any language barriers, we had some great people moments. When we dropped in on a mountaintop Serbian-Orthodox monastery, the monks (their long black beards matching their long black robes) joked with us, saying, "You look suspicious with no beards." In prepping them for my interview, I said part of our TV-production mission was to help Americans understand, rather than fear, people who are different.

In the middle of this Montenegrin nowhere, we met an American family traveling with their 91-year-old grandmother. We shared stories of beautiful times we've enjoyed and lessons we've learned getting to know the people in this region. The grandma said, "Traveling in places like this inspires me to keep going when I should be staying home."

Most tourists stick to Montenegro's scenic and increasingly glitzy Bay of Kotor. It's certainly worth a visit, but for a Back Door experience, head deep into the rugged interior of Montenegro.