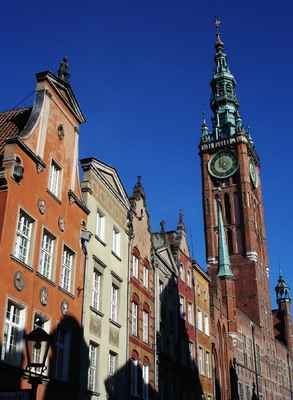 Standing at the end of Gdansk's long wooden pier, I realize that I can see two of the most important sites in 20th-century history: the spit of land where World War II began, and the shipyard where the Cold War started its long and gradual final act. Many people imagine this northern-Poland city to be a wasteland of rusted, smoke-belching shipyards. But that's just one view of this multifaceted place. Gdansk boasts an illustrious history and one of the most picturesque old quarters in Eastern Europe.

Gdansk's magnificent Main Town features block after block of red brick churches and colorful, ornately decorated mansions. As one tourist gasped to me, "It's like stepping into a Faberge egg." A stroll along the main drag, ulica Dluga, allows you to soak in the city's gorgeous architectural cancan. During the Golden Age, these eclectic homes (inspired by a wide range of people, including the Jews, Dutch, Italians and Germans) were taxed based on frontage, so they were built skinny and deep. The widest houses belonged to the super-elite.

This lovely street wasn't always so lively and carefree. On Sept. 1, 1939 -- nearly 70 years ago to this date -- Adolf Hitler invaded this once-German city, sparking World War II. By the end of the war, nearly 80 percent of the city had been destroyed, and the main street lay in ruins. Locals stubbornly rebuilt their town with the help of detailed drawings and photographs, mostly using the original brick. Today, excursion boats ferry history buffs through shipyards to Westerplatte point, where the war's first shots were fired.

Right outside the Main Town's Golden Gate, you'll find the , dedicated to the globby yellow stuff that's sold all over the city. Almost 75 percent of the world's amber -- a fossilized tree resin -- is mined in northern Poland, much of it washing up on beaches following winter storms. Amber comes in 300 distinct shades, from yellowish-white to yellowish-black, opaque to transparent. I didn't believe it either, until I toured the museum, which shows off amber clocks, amber chandeliers, amber beer steins, a model ship with delicate amber sails -- you get the idea. There's even an unfinished altar made entirely of amber at .

If you're interested in visiting a milk bar (bar mleczny), Bar Mleczny Neptun in the Main Town is the city's most popular. Milk bars are government-subsidized cafeterias, a holdover from Poland's communist days, when lowly workers could barely afford to eat out. Bar Mleczny Neptun has more charm than most milk bars, thanks to its outdoor seating along the most scenic stretch of the main drag. Load your tray with traditional Polish foods, such as borscht or pierogis, pay the cashier, and do a double-take when you realize how little you spent. My bill for a full meal usually comes to about four or five dollars.

Just 15 minutes north of the Main Town, the charms of the old core fade quickly as you come across the . Here, in the place that Solidarity leader Lech Walesa called the "cradle of freedom," a motley collection of brave shipyard workers took on and ultimately ended the USSR's stranglehold on Eastern Europe. In August of 1980, a shipyard crane operator and known dissident was fired unceremoniously, sparking a strike. Upon hearing this news, Walesa -- an electrician who had been fired for being an agitator -- rushed to the shipyard and scaled the wall to get inside and rally the protestors.

Near the shipyard, the excellent "Roads to Freedom" exhibit tells the inspiring story of those workers and re-creates the difficult communist reality they were struggling to change. A typical phone booth is marked Automat Nieczynny -- "Out of Order" -- as virtually all phone booths were back then. An authentic WC is stocked only with old newspapers (actual toilet paper was cause for celebration). A replica of a typical 1970s grocery store captures the desperate days when government rationing led to rampant food shortages. You'll see a display case filled with phony wheels of cheese marked "fake," a loaf of bread with a cigarette butt baked into it, and shelves stocked only with vinegar and mustard (about all you could buy during lean times).

Nearly 20 years after the fall of communism, Gdansk is changing. Neighborhoods that were World War II rubble a few years ago are now being remade into posh condos and shopping malls, and a futuristic stadium shaped like a translucent glob of amber is being built to host the 2012 Euro Cup soccer tournament. Despite modernization, Gdansk will always have a powerful history. Exploring the lanes of this city, I always imagine that around each corner, I might bump into old Lech Walesa -- now happily retired -- still wandering the time-passed streets.