In Search of the Aloha Smile: Oahu 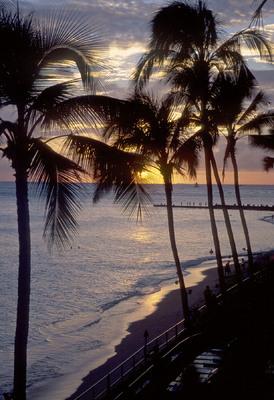 The sun sets through the palms Waikiki Beach, Oahu

You have to wonder. If Barack Obama's grandparents hadn't moved to Oahu before he was born, would he be our 44th president today?

As an honorary Hawaiian (self-appointed) and an Obama supporter, this is my chance to put the two subjects into the same story, where they assuredly belong. Though Obama acknowledges his family and ancestry in his autobiography, "Dreams From My Father," it was Hawaii, I suspect, that shaped his character.

Was Hawaii's multiracial society the source of that sunny smile, self-assured stride and sense of command? Did Oahu's easy-going lifestyle, unhurried and tolerant, teach respect for others while nurturing even-tempered optimism? The residents of Oahu, proud of their native son, certainly think so.

As a frequent visitor to Hawaii, it's the islands' physical beauty that captures my attention: the impossibly steep green peaks, brilliant sunsets and roving trade winds. Intoxicating, yes, they are. But my lasting memories are of people, of the strangers who greet you with a smile and friendly families who offer hospitality.

Michelle Obama said it best. "You can't really understand Barack," she told an interviewer, "unless you understand Hawaii." And you can't do that, she might have added, unless you come for a visit.

Before the last presidential campaign, travelers rarely bothered to tour Honolulu's inland neighborhoods. No longer. Since the election, a half-dozen guided bus tours have popped up to escort tourists on the Obama circuit, driving past , where the president was born in 1961, (see a copy of his birth certificate at www.obamasneighborhood.com), cruising past his several boyhood homes, slowing down to point out the corner markets where he stopped on the way home from school and the local park where he shot hoops.

Some tours are more expansive, with stops at historic sites, including the Arizona Memorial at Pearl Harbor and the restored Mission Houses in downtown Honolulu. There's also a walking tour led by Uncle Jack, a self-taught local historian.

Chances are you'll see the school where Obama went to kindergarten. Hanging with his classmates Obama would have developed global tastes, for everything from scrambled eggs and spaghetti, to plate lunches, spam musubi, malasadas and hulihuli chicken. His classmates' parents and grandparents would have been all or part Chinese, Japanese, Korean, Samoan, ethnic Hawaiian, Filipino, Portuguese, and assorted European-stock haoles (white). Was pidgin (slang English) a common denominator for these kids? I wish I knew.

"Do you think people are as color-blind as they seem?" I asked Darlene Morikawa, with the State Tourism Office.

"Just about everyone here has inherited what I call potluck," she said. "We're proud of our individual heritage, of course. But we're Hawaiian first and foremast. That's where we get our identity, our sense of who we are. I happened to catch Oprah when her guests, African Americans mostly, were talking about how it mattered if you were more brown, or less brown, or almost white. It really surprised me. I didn't know that on the mainland, people thought about color like that."

To learn more about Obama, tours are a good way to start. But they're only half the story. The rest evolves as you explore the island -- in the spirit of research, of course. First, venture away from the safety of your hotel pool and make friends with the world's largest ocean. Float on the swells. Kick up your feet. Duck your head under and embrace the waves.

Next, rent a car; you'll need it to wander the byways. Don't waste time on commercial attractions, like the submarine rides and the booze cruises. And pass up national-franchise fast-food joints in favor of local eateries run and patronized by kama'ainas (local Hawaiians).

Go native, and sample that most revered of all Hawaiian fast foods, the plate lunch. A treat when an expert makes it (and a dog otherwise), it's one of the islands' basic food groups. With years of experience under his belt, Obama likes the Rainbow Drive-in, in Honolulu, whose Website proclaims, "For 45 years, Rainbow Drive-in has served the most ono grindz (delicious food) to Hawaii and the World."

I like the barbecue chicken plate lunch, with macaroni salad and rice; the plate is $6.50. The Ifuku family, owners of Rainbow, at 3308 Kanaina Ave., donates generous sums each year for scholarships and school supplies, something to muse on as you open your wallet. See their menu at www.rainbowdrivein.com.

My favorite lunch item is saimin, served at one of Oahu's half-dozen Zippy's, also an Obama hangout. If you see this Chinese-Hawaiian soup elsewhere, make sure it contains saimin noodles in chicken broth, bits of char sui pork, won tons, eggs, green onions and a bit of bok choy. I haven't eaten at Alan Wong's, famous for Hawaiian regional food, at 1857 King St., but I'm told that Obama likes this restaurant for special occasions.

If you're staying in a Waikiki Beach hotel, walk southeast along the sand toward Diamond Head, to Kapiolani Park and the beach across the street. Local families picnic on the sand, swim in the waves and sun on this stretch of shoreline, a great place to strike up a conversation, and even feel like local.

The Park, a great swath of grass named for Queen Kapiolani, is Hawaii's oldest public park, established in 1875. The grounds include the Waikiki Shell, a zoo, tennis courts, soccer fields and space to fly a kite or have a picnic. The Shell is the chief city venue for free summer-evening concerts on the grass, and a good place for people watching.

Ask your concierge for a schedule, bring a beach towel, food-to-go (and your favorite libation) and join the party. Obama picnicked here with his grandparents and most recently, with his own children -- and the Secret Service.

Most visitors to Hawaii stick to Waikiki Beach, where the waves are long, smooth and predictable. But to swim with the locals, head to Kailua Beach County Park, on the southeast side of Oahu. Here's where the Obamas and friends rented two adjoining houses last Christmas. But there's plenty of public beach and parking. Do observe the hand-printed "kapu" (forbidden) signs, however, and don't park across private driveways. That famous Hawaiian good nature has limits.

Another safe beach is at Kuilima Point, on the North shore, directly east of Turtle Bay Resort. The beaches here -- and everywhere in Hawaii -- are public, and there's always public access. For lunch, drive a couple miles farther to the Shrimp Wagon, at Kahuku Point, on the makai (ocean) side of the road, for a plate of fresh steamed shrimp and salad.

Stop at Sandy Beach, now with a new parking lot, to see where Obama still bodysurfs when he comes home. Don't get into the water, however. One of the island's most treacherous beaches, Sandy regularly chews up novices.

For the best luau and hula performances, pass up the crowded and impersonal buffet dinners staged by big hotels and look instead for a community event, often hosted by churches and charity groups. Visitors are always welcome.

Even the , famous for the South Pacific's most prestigious collection of Polynesian art and artifacts, gets into the aloha spirit, inviting local school kids to demonstrate some of the basic hula moves. The steps are practiced and the smiles are learned, at least at first. They smile at you, you smile at them, and pretty soon, everyone's smiling; in fact, kinda like Obama.