Sailing Around the Tahitian Islands 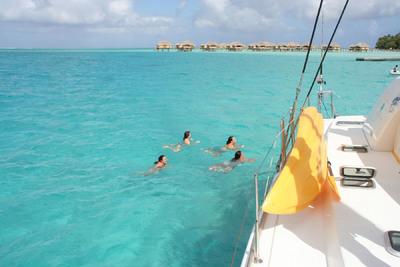 We are in paradise -- really. The fish literally eat out of our hands, the water is so clear I can see seashells in the sand six feet below us and the island nearby is ringed by lush, green trees, some dripping with exotic fruits.

We are following our Catamaran Captain Turo Ariito around the tiny motu (islet) named Tau Tau, (yes, we grown-ups definitely thought Gilligan's Island) off the Tahitian island of Taha'a to some of the best snorkeling we've ever enjoyed. The Coral Garden teems with fish -- striped banner fish, long skinny trumpet fish, parrotfish, triggerfish, a barracuda and big ugly eel -- that eat the scraps of day-old baguettes (we are in French Polynesia, after all).

Sure Tahiti (www.tahiti-tourism.com) is a favorite spot for honeymooners and we meet plenty during our two-week sojourn here, but we meet lots of families, too. Tahiti is closer than many think -- just a little over seven hours from Los Angeles, about two hours farther than Hawaii -- and Air Tahiti Nui (www.airtahitinui-usa.com) is encouraging more families to visit with kids-fly-free offers and discounted hotel rates.

We're traveling with another set of parents and four 18-year-olds -- my daughter Mel and her three friends who have been BFFs since they all met at Camp Kamaji (www.kamaji.com) in Minnesota nearly a decade ago. When Mel asked me to plan a graduation trip to include Margaret, Lane and Orlee, I figured it had to involve sailing, since the girls spent their summers sailing (later teaching sailing), and it had to be someplace they likely wouldn't go on their own -- in the near future anyway.

So here we are exploring a small slice of French Polynesia's 118 islands -- the four girls who have come from Connecticut, Wisconsin, Kansas and California, my husband Andy and me and Allan and Pam Roza, from Milwaukee, whose daughter Orlee only reluctantly agreed to her parents joining us. I'm especially glad they are here when it turns out Captain Turo speaks little English and The Rozas, who were raised in Canada, speak fluent French.

Our 40-year-old captain is straight out of Central Casting -- or a Gauguin painting -- huge, muscular with a long mane of hair, tattoos, which he explains tells his family story, and a smile that no matter what happens makes us all relax. In the past, we've chartered sailboats closer to home in the Caribbean when we didn't have a captain. Check www.sunsail.com and www.moorings.com, which also have outlets here, but I couldn't have imagined this trip without Turo, a prize-winning sailor who has competed in races around the world.

Turo regales the girls with tales of his four sons (by four different women) who live around the world. One look at Turo and I hear my daughter voluntarily speaking French for the first time outside the classroom. And wherever we go -- to the tony resort on Taha'a, to the local summer Heiva festival on the island of Ra'iatea to the iconic Bloody Mary's restaurant on Bora Bora, everyone knows Turo. (They even know what he likes for dinner.) He's got friends and cousins everywhere and leads us to places we never could have found on our own.

Sailing trips are a great value -- significantly cheaper than hotels, especially when splitting costs with another family and cooking your own meals. There are other American families like ours sailing these islands. It's a great adventure -- sails billowing in the wind, the sun in your face, no one anywhere near -- but sailing isn't for everyone. The seas get rough at times. (Bonine helps!) You've got to pump toilets to make them flush, showers are rudimentary and living quarters are cramped. But when you've got sea breezes, sunshine and starry nights, you don't need much beyond bathing suits, shorts and flip-flops.

We let Turo lead the way around the Leeward Islands -- from Ra'iata, the yachting capital here, to Taha'a, known for its pearl farms and vanilla plantations, to Huahine to Bora Bora with its deluxe resorts. Later we will visit Mo'orea (more about those adventures in other columns). (I'm glad I have my Lonely Planet Tahiti and French Polynesia guide along (http://www.lonelyplanet.com/tahiti-and-french-polynesia/tahiti).

Each island is different and more beautiful than James Michener's descriptions in his "Tales of the South Pacific." The locals are even more exotic than imagined with their crowns of flowers and leaves, the women wearing brightly colored pareos that can be tied so many different ways. Everyone is friendly as we buy groceries at local markets (fresh coconut milk) and join them at an annual competition in Bora Bora one morning where we watch young men weave thatch for roofs from dried Pandanus leaves. These days, though, thatched roofs will only be found at hotels. "We've evolved," young local mom Heiata Tupahiroa explains. Thatched roofs have to be changed every few years.

In many places, we're the only Americans, the only English speakers, which only adds to the adventure.

On Taha'a we meet the Champons, a family of pearl farmers, and learn how those beautiful black pearls are cultivated. Moeata Hioe, a nurse educated in America, shows us around the Vanilla Valley (the vanillavalley@gmail.com), the vanilla plantation she took over from her grandfather. Vanilla Valley produces 30 tons of vanilla annually and everything is done by hand right down to pollinating the plants. "If the bees did it, it would be so easy," Hioe says. But they won't go hungry. There are fruit trees everywhere -- limes, starfruit, grapefruit and mangos -- and 47 species of banana trees. "You have to love what you do," Hioe tells the girls. That's a good message for four girls about to go off to college.

We snorkel with big Sting Rays without another boat in site, jumping off the boat to swim. We eat local pamplemousse (giant, tasty grapefruit) for breakfast, crisp baguettes, salami and cheese for lunch or (organic) mac and cheese I've brought from home. We make papaya smoothies -- sans blender. We drink local Hanavave beer and my husband introduces Turo to martinis. It's everything a vacation should be and all the better because our BlackBerrys don't work and we aren't near any Internet cafes.

And then there are the sharks. Just as we're sailing into the Bora Bora lagoon with its majestic green cliffs and clear water, we catch a 16-pound Mahi Mahi! We can't believe our luck! Turo tells us a fish this size would cost $70 or more in the local market.

Turo cleans our catch where he knows the Lemon and Reef sharks -- some as long as four feet -- will be. Soon the sharks were swimming in circles around the back of our boat, looking like a bunch of kindergartners squabbling over the last cookie. Turo assures us it's safe to get in the water and we do, watching the sharks swim beneath us, snapping photos with our Olympus, good up to 10 feet underwater (Stylus Tough-6000 www.olympusamerica.com).

That night, Turo barbecued our fish and we ate under the stars, the boat gently rocking.

We congratulate ourselves for our good fortune -- catching this magnificent fish, having Turo as our captain and participating in an adventure that the girls -- and us -- won't ever forget. We beg Turo to visit us for Thanksgiving. He just smiles.

Vacation Travel - Taking the Kids - Sailing Around the Tahitian Islands