How to Beat the Hydra in 'God of War' 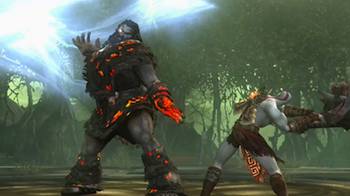 Fact: Hydras have nine heads. Instead of fighting all nine heads in the opening moments of God of War (available via the "God of War" Collection on the PlayStation 3

Step 1: Stop wondering where the other four heads went and focus on the remaining heads. As you proceed through the level, you will see other hydra heads off in the distance, fighting with doomed soldiers on sinking ships. Just forget about those heads. Those heads are not your problem. Your problem will be arriving soon enough.

Step 2: Brace yourself for a series of extremely dramatic battles. I suggest keeping an open beer nearby. That way, you can pause the game whenever things get too dramatic, and take a pull off your beer. This has the effect of calming you down. CG Pro Tip: Hardcore gamers, and hardcore alcoholic gamers, will actually have a second beer already opened and ready to go before this battle.

Step 3: Head One will attack you in a narrow corridor. This head has basically one attack: a bite. Sometimes these bites can come in quick succession, like this: BITEBITE. Your friend during this battle is the L1/Block button. Hold it down whenever Head One comes in for a BITE (or BITEBITE). Head One will be vulnerable for about four seconds after this. Use the Square/Light Attack Button to damage the beast. Repeat this. If you get bitten, do not panic. Pause the game. Use your beer. Once you've whittled down its health far enough, the game's first mini-game/finisher sequence will begin. Do not get distracted with what is happening on-screen! Very dramatic things are happening! Ignore them! Focus only on the button presses. Hit them in sequence, and bip, boff, baff, Head One coughs up a bunch of Green and Red orbs as it dies. So long, Head One. Write if you get work!

Step 4: LOOK OUT! Head Two will surprise attack you once you reach the open area of the ship's deck. It will blow through the wooden boards and tower over you. If you are feeling afraid, turn to the beer. Begin by tagging the neck of Head Two with your Light Attack. Head Two has a breakdancing/spin move (defend against it with the L1 button) and a flopping-penis move (use the right analog stick to roll out of its way). Keep attacking with the Light Attack button. Occasionally, Head Two will scoop you up into its mouth. DO NOT PANIC. Hit the Circle button to pry open Head Two's jaws. Light Attack, L1, Light Attack, Circle, Circle, Circle, and voila : more Green and Red orbs as it dies, and vanishes back into the hull of the sinking ship.

Step 5: Head Three, Head Four and Head Five all need to be dealt with simultaneously. This is the final fight against the Hydra, so you should be working on your second beer by now. Pick one of the two smaller heads -- either the left or right one; it's up to you -- and use the same L1/Light Attack strategy that worked so well on Head Two. After a few rounds of this, Head Three will crash to the floor in a daze. Climb the nearby wooden crates -- the jumping mechanic is terrible, so be patient, and take your time. Once you are at the top of the pile of wooden crates, leap onto the nearby hanging anchor and drive it right through Head Three's head. Ha, ha!

Step 7: Head Four, aka the Other Smaller Head, should be dealt with in the same exact fashion. Should you misjudge your crate jumps, and should Head Three or Four revive (they typically will after 10 seconds), simply repeat the L1/Light Attack strategy until you've dazed the Head again. Once both heads have been pinned to the deck with anchors, it's time to scale the nearby net and take care of Head Five, aka The Big Head.

Step 8: Head Five uses a roar that is so powerful, it will knock you off your crow's nest perch. Use L1 to block. This will prevent you from being knocked off the perch and being annoyed. (You have to re-climb the net each time you are knocked off. Annoying.)

Step 10: Be liberal in your use of your magic attack/L2 on Head Five. Don't be stingy with it! Whenever Head Five gets within arm's length, hit the L2 button and fry the head with a nice, satisfying burst of Poseidon's Rage (it looks like a bunch of lighting all striking the head at once; ha, ha, take THAT, head).

Step 11: Head Five will eventually crash into your crow's nest perch, and another mini-game/Quick Time Event will ensue. Again, ignore what is happening in the background and focus only on the button presses. If you do so, Kratos will use Head Five to do damage to the wooden mast.

Step 12: Repeat these step two more times. Here is the sequence: L2/Magic, Square/Light Attack, L1/defend against the roar, Quick Time mini-game. On the third and final time, a movie will play showing Kratos impaling Head Five RIGHT THROUGH THE DAMN EYE on the broken, wooden mast. The Head writhes around in agony before giving up its ghost. Kratos climbs down to the ship's deck and puts away his Blades of Choas. He looks to the left, and Head Four suddenly pops. He looks to the right, and Head Three pops, too. Take a moment, relish this accomplishment, and treat yourself and your new friend, Kratos, to a fresh beer. You boys have earned it.