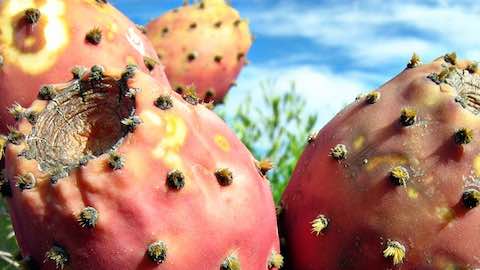 Perhaps it's those forbidding spiny barbs, but cactus, a centuries-old staple in Latin cuisine and available in the produce section of many supermarkets, has yet to go mainstream in this country. But that may change courtesy of prickly pear cactus juice, which is gleaning attention for its potential health benefits.

The prickly pear cactus, also known as nopal cactus, is one of more than a dozen varieties in the Opuntia genus in the family Cactaceae that grow abundantly in the Mexican Sonoran Desert and southwestern U.S. They have flat fleshy pads, sold as nopales or nopalitos, that are actually cactus branches or stems with barbed spikes.

The juice comes from the cactus "fruit," which is really the cactus flower. Known as prickly pear, paw paw, and desert fig, the red fruit resembles a small round cucumber with spines. While natives of these areas skillfully harvest, peel and juice the spiny and barbed prickly pear fruit, even novices can enjoy cactus juice as it is now available commercially.

The juice of the prickly pear cactus contains a relatively rare form of antioxidant called betalains, which also is found in beets and red Swiss chard, providing the vegetables' pink-red pigment. Chemical analyses of the fruit extracts from several varieties of prickly pear cacti show the presence of other powerful antioxidants--polyphenols, flavonoids, carotenoids and vitamin C.

In a study published in the journal Alcohol, cells in rats were protected from damage by ethanol alcohol when given cactus fruit extract. Similarly, anti-inflammatory effects of cactus fruit juice were linked to mildly reduced symptoms of alcohol hangover in humans, according to a study in the Archives of Internal Medicine.

Traditionally used in Mexican medicine to treat diabetes, preliminary studies show that prickly pear fruit extract may aid in lowering blood glucose, as well as cholesterol and triglycerides (Human and Experimental Toxicology, .) A study published in the found that the extract decreased levels of blood glucose and cholesterol in rats.

Keep in mind that the science on the benefits of cactus juice is still young, and we have much more to learn about its potential effects in areas like glucose management. However, feel free to enjoy this plant beverage as part of your healthy diet. But it's probably best not to juice the prickly pear fruit on your own.

The skins are covered in tiny spines that can be dangerous if ingested or painful if they stick you. Instead, shop the beverage aisles of health stores for bottled varieties. Just be sure prickly pear puree or juice tops the list of ingredients so that it's not diluted with undesirable additives and sweeteners.