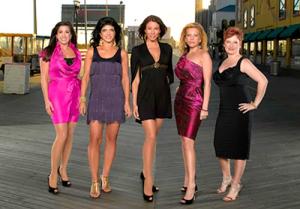 Forty-year-old Stacey Anderson didn't seem all that different from the long line of peppy predecessors looking to find love -- or, at the very least, 15 minutes of fame -- on reality television. So how was TV Land going to sell its take on "The Bachelorette" and cut through the glut of relationship-oriented reality TV?

"We called it 'The Cougar,'" says Keith Cox, executive vice president for original programming at TV Land. "The title got us noticed. That word, 'cougar,' is so much in the zeitgeist right now that the press just picked up on it. That put us on the map."

Finding a spot on that increasingly crowded map is the big challenge right now for first-season reality programs. After all, there are only so many hours in the day to watch television (TiVo might even exacerbate the time crunch), and viewers tend to be loyal to their favorite show, even if it's a little long in the tooth. (We're looking at you, "Top Model.")

To punch through, networks are tinkering with the tried-and-true formats, devising new promotional ideas and coming up with increasingly unique concepts to stand apart from the pack. The goal, at minimum, is to hold onto the audience that's already watching a network's existing reality programming.

"We feel like we have an embarrassment of riches, but we never want to be caught short," says Frances Berwick, Bravo Media general manager.

"Reality series can have a finite life. So we're constantly launching new shows and leveraging, building off our successful hits."

Bravo did just that last month, premiering "The Real Housewives of New Jersey," yet another incarnation of the net's "Real Housewives" series.

Launching the show in May gave it a wide berth for media attention, and Bravo made sure that existing fans knew about it by attaching it to the finale of the New York City version.

The result was the highest-rated premiere in the history of the franchise, up 186 percent from last fall's "Real Housewives of Atlanta" opener.

Bravo's Jersey girls weren't necessarily any more outrageous than their predecessors, but the "Sopranos"-esque women did fit the profile of what reality programmers are looking for these days.

"What really works is when you present almost unbelievable people who, in fact, are entirely authentic," Berwick says.

"That's where reality supersedes scripted. Because if you were to write that character in a scripted show, nobody would buy it."

Over at VH1, programming exec Jeff Olde says if a show can't be sold on a quick promo, he'll tweak or pass.

"For a show to work on VH1, it has to be loud," says Olde, executive VP of original programming. "That could be loud emotionally, it could be loud comedically, but 'loud' is the operative word."

"You've got to keep people talking about your show in order to keep it alive between seasons," Olde says.

BBC Worldwide is taking the touring concept one step further when it debuts "Great American Road Trip" in July on NBC.

The latest from the folks behind the worldwide "Dancing With the Stars" phenomenon pits seven RV-traveling families against each other in challenges held at various iconic locations in the States.

What sets the show apart is that it's as much a travelogue and character study as it is a competition, says Jane Tranter, executive VP of programming and production for BBC Worldwide.

"The intensity of the confined space within the RV generates tension and reveals character," Tranter explains. "Anyone who has been cooped up with their families will be able to relate to that sort of pressure-cooker atmosphere."

Tranter believes that running "Road Trip" during the summer will work in its favor as viewers will be in a leisure-oriented frame of mind. That kind of synergy is important, execs says, since proper scheduling of first-year reality shows -- whether they're following proven programs or situated in primo timeslots -- can mean the difference between a franchise and a failure.

Thus, Bravo will follow the June finale of "Real Housewives of New Jersey" with the launch of another reality series, "NYC Prep."

With its peel-back-the-page look at six affluent Manhattan teens, "Prep" adheres to the tone and style that has made the "Housewives" franchise a success.

"There's definitely aspiration in there as well as relating and, I suppose, judging," Bravo's Berwick says.

"If you want to cut through the clutter of reality programming, you've got to have that mix of emotions. And if you have that mix focused on one character, all the better. Then you've got yourself a hit."