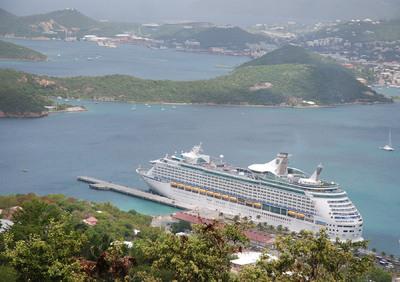 Royal Caribbean 'Explorer of the Seas'

We've sailed on many small ships, but had never cruised on a big oceanliner like "Explorer of the Seas" with its capacity of more than 3,000 passengers. We had no clue about what we'd been missing.

On small ships with 100 passengers, it's all about getting off the ship a couple times a day to see new parts of the world. On ships, it's all about exploring onboard all day and into the night, living the life of cruisers.

It's true we disembarked on our nine-day voyage to see the lovely islands of Bermuda and in the Caribbean, St. Maarten, St. Thomas and Puerto Rico. But most of the time, we lived it up aboard our 14-deck floating resort hotel.

Our fellow traveler was happy-go-lucky Eve, our 13-year-old granddaughter. She had never been on a cruise before and she was up for anything from a late-night disco party on the Royal Promenade to scavenger hunts throughout the ship organized by award-winning program for kids. She claims to have found answers on all 14 decks, including at the wedding chapel at the top of the ship -- as it happened, there were three weddings on this sailing.

The living is easy onboard. Standing at a ship's rail gazing at sea, lounging on a recliner on our stateroom balcony in the back of the ship where it was always balmy and never windy, or swimming at the pools.

But, of course, there so many other things to do. Events and performances -- both big and small -- or skating in the rink where the Ice Spectacular show appears several times during a cruise or climbing the ship's popular rock wall.

Every night we took in musical performances in the . Our favorites were anything with the Royal Caribbean Singers & Dancers.

Even though there are thousands of guests, this ship's well trained staff, which hails from more than 70 countries, is quick to offer personal service. As an example, we wanted a small table in the Magellan Dining Room just for us instead of our assigned seating at a table for 10. No problem. And one of the little niceties at our new table was when the waiter pulled out Eve's chair and asked, "How is Madam this evening?" She was thrilled!

So throw on your cabana wear and be sure and bring the kids. This is the summer of great last-minute prices. (www.royalaribbean.com) with its fleet of 20 ships, is offering family stateroom discounts and other good deals.

My grandparents have a tradition of taking their grandchildren on a very special trip when they turn 13. After watching my cousin and sister return from their trips with extraordinary tales, I had wondered for years where I would land. Finally, the day came that I found out I was going to the Caribbean!

There were countless qualities of my nine-day cruise that I enjoyed. One of these was the food on board.

My mom had warned me before I left that there would be food everywhere. I thought of her words of caution when I looked down at my plate after returning from the buffet the first day. Piled high with scrambled eggs with ham and melted cheese, a large pancake, juicy sausage, bacon strips, a chunk of a ham, two croissants, butter, syrup, orange juice and water, it was quite the silly looking mountain ... like something straight out of a Dr. Seuss book. But I quickly learned not to take so much, no matter how delicious looking.

I had so many favorite moments -- one of the best was having the opportunity to swim with show-trained dolphins on the island of Bermuda, petting their slimy, smooth bodies and dancing and splashing playfully with them in the water.

Another was getting the fruity facial at the ship's spa. While soft, slow music with bird chirping sounds played, Leigh Ann, the attendant, covered my eyes and spread a cool, thick cream on my face, which felt magnificent. I'm not sure whether I fell asleep while she was out of the room, or the mask's magic spell had simply hypnotized me into its peaceful trance. When my grandpa met me later in the waiting area after the treatment, he told me my face looked radiant.

Yet another part of the trip was what we saw after the day was done.

Our stateroom was like a hotel room taken to the most accommodating level possible. Our attendant, Randy, became our friend to greet each day in the hall. After the second daily room cleaning, he would leave some of our new towels folded into giant origami-like figures of animals, which we all loved. My favorite was the monkey!

All in all, this has been one of the greatest experiences of my life.

There are no words in existence to thank my grandparents for this incredible opportunity!