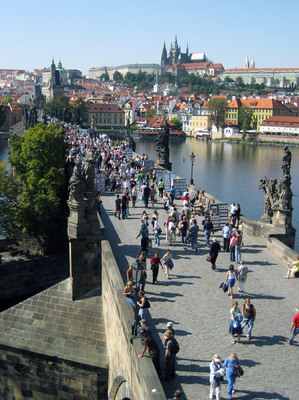 From Prague to Poland to Turkey, there are plenty of changes in the works for 2010.

Prague, the most-visited city in the region, is nearing completion on the first phrase of the restoration of its iconic Charles Bridge (sometime in 2010). Built in the 14th century, this much-loved bridge offers one of the most pleasant and entertaining 500-plus-yard strolls in Europe. And now old-fashioned gas lighting will make an evening walk across this landmark even more of a joy.

Nervous about Al-Qaeda threats, Radio Free Europe has moved its headquarters out of the communist-era Parliament building in Prague's New Town. A guided tour now takes you step-by-fascinating-step through recent Czech history in the building's once off-limits interior.

In Croatia's top destination, Dubrovnik, the fortress on Mount Srd -- the peak hovering just above the Old Town -- is reclaiming its status as a tourist attraction. Workers are repairing the cable car that once linked the city to the fortress, before the car was destroyed during the breakup of Yugoslavia (www.dubrovnikcablecar.com). When the work is completed (likely this summer), it will be easier for visitors to enjoy the mountaintop's sweeping views and a modest new war museum about the 1991-1992 siege of Dubrovnik.

Both Croatia and Slovenia are continuing to expand their expressways. Slovenia has switched from a toll-booth payment system to windshield toll stickers called "vinjeta" (about $21/week, $42/month). Croatia's expressways are being extended south from Split toward Dubrovnik. Work has begun -- and stalled -- on the controversial Peljeaac Bridge. This $400 million project would allow the highway to bypass a border crossing into Bosnia-Herzegovina, thereby keeping the road entirely in Croatian territory.

In 2012, Poland (jointly with Ukraine) will host the Euro Cup soccer championship. Throughout the country -- but especially in Warsaw, Gdansk, Poznan, and Wroclaw, which will host matches -- a wave of new construction is refreshing and re-energizing dingy old quarters. Poland is also using the Euro Cup as an excuse to upgrade its rail network. (Unfortunately in the short term, construction is causing many train delays.)

In Krakow, Poland's historic capital, the big news is that Oskar Schindler's factory -- where the German businessman did his creative best to save the lives of his Jewish workers during World War II -- is being converted into a museum, opening in mid-2010 (www.mhk.pl). At this site, where Steven Spielberg filmed some of the scenes in "Schindler's List," exhibits trace Krakow's World War II experience. Visitors can also see a replica of Schindler's office and watch testimonial footage of Schindler's grateful employees.

Also in Krakow, the eclectic has closed for restoration, likely through 2012. The collection's two masterpieces (Leonardo da Vinci's "Lady with an Ermine" and Rembrandt's "Landscape with the Good Samaritan") are temporarily on loan to other cities, but sometime this year will be displayed in the Museum of 19th-Century Polish Art, above the Cloth Hall on Krakow's Main Market Square.

At Auschwitz, individuals may no longer enter the Auschwitz I part of the concentration camp memorial on their own at busy times (May-Sept. 9 a.m.-3 p.m.). During these peak hours, you'll need to join one of the memorial's organized tours or hire a private guide. The famous "Arbeit Macht Frei" (Work Sets You Free) gate is now a replica, after the original was stolen and then recovered last December.

In Warsaw, the confusing Central Train Station is slated for a much-needed remodel sometime before the Euro Cup. Since 2010 marks the 200th birthday of Polish-born composer Fryderyk Chopin, Poland is celebrating the Year of Chopin (www.chopin2010.pl). Along with special concerts and events, Warsaw's has gotten a high-tech facelift, with interactive exhibits to complement the Chopin memorabilia.

Turkey's national currency, until last year called the New Turkish Lira ("Yeni Türk Lirasi," or YTL), has been renamed. It's now simply TL -- Turkish Lira. Istanbul's wonderful Mosque of Süleyman the Magnificent is closed for renovation, likely until August (but you can still visit its courtyards, cemetery, and mausoleums).

The Galata Dervish Monastery in Istanbul's New District is likely to be closed through late 2010 for renovation. But even during this work, you'll still be able to see performances of the Whirling Dervishes. The authentic, two-hour religious ritual -- performed by followers of the Muslim mystic Rumi -- will be held at temporary locations (at a theater in the New District and even at the Sirkeci train station; see www.rumimevlevi.com).

Wherever your whirl in Eastern Europe, you'll find that many of the natives speak excellent English and are forever scrambling to impress their guests. Any rough edges left over from the communist era simply add to the charm and carbonate your experience.