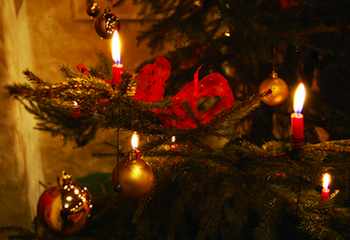 In countries like Switzerland, the perfect traditional tree must have well-spaced branches to safely accommodate the lit candles that will magically transform it on Christmas Eve.

For me, holiday decorating is like a yearly trip down memory lane. Two little red carved birds on a thread remind me of my early "Europe through the gutter" days, when I dropped into the trendy shop in Helsinki and bought the only thing I could afford. I hate tourist traps, but I couldn't resist the delightful German-style painted wax and delicately carved ornaments from the Kathe Wohlfahrt Christmas shop in Rothenburg. And the green and red skates with paper-clip blades summon up memories of my grandmother, who hand-knit them 20 years ago before her last Christmas.

Just like these ornaments are a reminder of where I come from, and where I've been, holiday decorations in Europe are a celebration of each culture's history, tradition, and ancestry. From a tiny mountain village in Switzerland to the bustling metropolis of Rome, the spirit of the season can be seen in homes, on squares, and up and down the streets.

Ancient Romans celebrated a pagan holiday called Saturnalia on December 25. This hedonistic, solstice-themed festival honoring Saturn, god of agriculture, featured toga-clad partiers parading by torchlight through the streets, giving thanks for their crops by drinking and eating heartily. Meanwhile, would decorate the city with evergreen wreaths and give beeswax candles as gifts.

Modern-day Rome celebrates the holidays with almost as much vigor, adorning churches, houses, piazzas, porticos, and even train stations with lovingly constructed Nativity scenes, or presepio ("manger" in Italian). At Rome's Piazza del Popolo, an annual exhibition features 100 presepi, made by artists and schoolchildren. Some are intricate and beautiful; others are of dubious artistic quality. From old to avant-garde, each one is unique, a window into the imagination of its creator.

The ultimate presepio is at the Vatican, where a large Nativity scene includes huge chunks of fake sheep's cheese and bales of straw. A 100-foot-plus Christmas tree accompanies it -- a tradition started by the Polish . As the first non-Italian pope in a long time, he missed having a Christmas tree. So, early in his papacy, he added one to the celebrations on St. Peter's Square.

The idea of the Christmas tree hails from Germany, where hundreds of years ago, trees were strewn with cookies, apples, nuts, and sugar sticks, then eagerly raided by children. Today, Christmas-tree traditions hold strong in this part of Europe. While in America trees are usually bought, chopped, or assembled after Thanksgiving, in Germany and Austria, trees remain bundled up in parking lots until just before December 25. Right before the big day, parents decorate the tree in secret, keeping it hidden from their children until it's dramatically unveiled on Christmas Eve.

Though late to buy their trees, Germans decorate them with flair and delight. Along with ornaments and lights, they also add cookies and candies, often topping the tree with a Rauschgold Angel, a special tinsel angel made in Nurnberg. A toy-making center for centuries, Nurnberg is known for its Christmas market, when more than 200 wooden stalls fill the main square, selling handcrafted toys and ornaments.

One of the most popular holiday decorations is a homemade fruit figurine consisting of a walnut head, fig body, and prune limbs, all dolled up in a Bavarian folk costume. According to legend, a dying Nurnberg man made it as a thank-you gift for local schoolchildren who sang him back to health.

In France, decorations often focus around a creche, not a Christmas tree. A week before Christmas, families unbox their santons, little clay figurines that represent the people of a typical French village -- the doctor, the baker, the mayor, and others -- and lovingly arrange them around a stable with the Holy Family. Some families add a figure each day to the circle adoring the Christ child. Kids complete the creche with twigs and moss from their garden.

In the Swiss mountain village of Gimmelwald, holiday decorating is not just a family affair -- it's a neighborhood affair. Just as children open a different paper window each day on an Advent calendar, residents here reveal a new decorated window on a different house each day.

The debut of a new Advent window often comes with a celebration. In a kind of roving block party, neighbors emerge to meet friends and enjoy grilled sausages, hot mulled wine, and folk music on the accordion. Men take sections of logs (the size of a four-foot chunk of telephone pole), cut the ends into a point, and plant them upright in the snow. Coated with tar, they're set ablaze -- torches to light and warm the occasion.

Though each country has its own holiday traditions, the general feeling of joy, magic, and wonder is universal this time of year.