On the Road to Buenos Aires 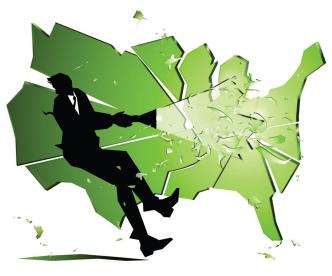 Events, from the AIG bonus calamity to President Obama's seemingly daily salvo of media appearances has allowed some interesting stories to fly under the radar screen.

One in particular involved indexing powerhouse MSCI Barra downgrading Argentina from an emerging market to a "frontier" market, one that is in league with backwaters like Kazakhstan.

This is yet another blow for the avowedly populist regime of Cristina Kirchner, whose recent behavior (nationalizing the state pension system, alienating important exporters) has driven the country further into the hole dug by her equally populist husband, Nestor.

The shame of it all is that early in the last century, Argentina rivaled the US as a potential economic superpower.

Its long fade to black was built on the back of unchecked government spending and borrowing, a currency policy that favored debasement over strength, and relentless political attacks on the productive and financial classes. In addition, the Argentine government has repeatedly confiscated wealth for its own uses, justifying these naked cash grabs with populist rhetoric about fairness and justice. Trade policy has been protectionist, which also accelerated the national decline.

Wait, are we still talking about Argentina?

The downgrade of that once promising nation should be a wake up call to Washington, but its highly unlikely that anyone noticed it in the midst of last week's AIG witch-hunt, and the President's continuation of his successful campaign for the White House. Apparently no one has yet told David Axelrod or Robert Gibbs that they have won, and that they can now occupy the White House full time.

Really, why bother with getting Congress under control and demonstrating leadership when its more fun to go on the Tonight Show? Anyway, Jay Leno isn't scary, unlike Nancy Pelosi.

While we continue to be absorbed by the various sideshows that grip Chris Matthews, real, substantive events have been going on that should make us wonder if the route we are taking is the expressway to recovery, or the road to Buenos Aires. The signs on the national GPS screen are certainly not good.

Let's start with the Left's resurrection of class warfare.

The AIG bonus debacle released a frightening attack on Wall Street and, by extension, the investing classes everywhere. What started as a traditional bit of congressional ass-covering (authorization for the AIG bonuses was approved in the stimulus bill passed last month) quickly morphed into approval of a blatantly unconstitutional 90% tax on those pre-approved bonuses.

Labor unions organized field trips to AIG employee "mansions" in Connecticut, while frightened families of AIG traders hired security guards. Death threats abounded, and we were suddenly reminded that yes you can have a Reign of Terror in the internet age. The impact of Congressional actions may take years to fully appreciate, but by the end of the week Geithner was having problems rounding up private capital for his newest TARP, and Goldman was looking to give the government back its initial TARP money. Meanwhile, a senior Merrill Lynch economist, David Rosenberg, left Merrill for a safer and more stable position in Canada, beyond the reach of Barney Frank and the increasingly thuggish Andrew Cuomo.

The next bad road sign got a great deal of media play, but the numbers involved are so complex that most people's eyes glazed over.

The Congressional Budget Office predicted that Obama's out year budgets would more than quadruple the increase in the national debt caused by the Bush administration, which was already the poster child for fiscal incompetence. Obama, however, makes Bush look almost Clintonian by comparison: the budget plan will add an astounding $9.7 trillion to the national debt, doubling it as a percentage of GDP. Even Peter Orzag, the Administration's Budget Director, agreed that if the CBO was right, the deficits would "ultimately not be sustainable".

The last development of concern came on the free trade front.

We have been assured by many economists that a second depression is unlikely because we learned a great deal from our experiences in the 1930s. To be sure, from a monetary perspective, Bernanke has done the right thing to flood the system with liquidity, the opposite of what happened 80 years ago.

But Bernanke is a student of the Depression, and really did learn from history.

Congress, of course, appears to have no institutional memory at all: at the behest of the Teamsters, the Congress terminated a pilot program to allow Mexican truckers access to US highways.

The cancellation of the program, a treaty obligation of ours under NAFTA, forced the Mexican government to raise tariffs on 90 US exports, impacting 40 out of 50 states. And this was only the most recent anti-trade move to come out of Washington: buy American provisions in the stimulus bill came under heavy attack from our trading partners last month, and many may be in violation of our treaty obligations under the WTO.

Things have become so farcical that China was being hailed by some analysts as more protective (rhetorically, at least) of free trade than the US. That China is still the People's Republic of China and hardly a bulwark of Jeffersonian democracy only added to the irony.

None of these developments can be construed as good news.

At the end of the day, a country's fate is really the sum of the decisions of its government and people. There is no law in the universe that says that we "will get out of this mess".

Many on Wall Street and in the political class seem to think that no matter what we do, we are the United States, and we will figure something out. That's why the the fate of Argentina should be a sobering reality check.

Even this, the greatest of all nations, can manage itself into irrelevance.

Politicians who blame easy targets like bankers while assigning no blame to average Americans who used their homes as ATM machines do the nation no favors. Putting up trade barriers and pandering to unions in the middle of downturn is a form of economic suicide that can drag down the whole world. And spending at levels that have even the French concerned about excess is no way to run a serious country.

America has been the greatest of all nations for a long time.

The sum total of these decisions created this great human enterprise. But we should not forget, especially at a crucial juncture like this, that with enough bad decisions and enough political incompetence, we can indeed manage ourselves into decline.

Even we can become Argentina.

Chris Thomas is a Managing Director at Hyman Beck and Co, a global macro hedge fund based in northern New Jersey. His views are entirely his own, and do not necessarily reflect the views of the principals of Hyman Beck or iHaveNet.com.