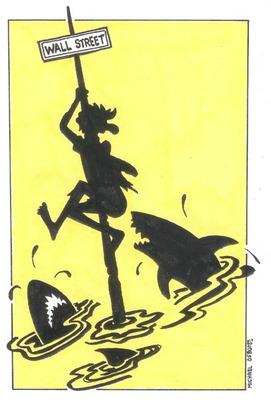 My Late Night Visits from the Ghosts of Financial Outrages Past, Present & Future

With my younger daughter away at Coachella (which I'm told has something to do with music), I was looking forward to a quiet night in, curled up in bed with my laptop and a few dozen pieces on the financial crisis I'd either bookmarked during the week or cut out from newspapers and magazines (yes, I still read them).

But instead of reading a few and nodding off to sleep, I ended up staying up most of the night, getting more and more outraged with each article I read. In the end, I probably wound up getting less sleep than my music-festival-rocking daughter.

Reading the business section these days is not for the faint of heart -- or those hoping to drift off to sleep.

Instead, you end up like Scrooge, visited by the ghosts of outrages past, present and future.

As a public service (I toss and turn all night so you don't have to) -- and also to make sure you haven't succumbed to outrage fatigue -- I've decided to distill some of the more infuriating recent lowlights. Warning: If you are reading this after 10 p.m., you might want to hold off until morning.

Goldman Sachs became profitable again -- by pioneering a new round of accounting tricks.

In its report on the first quarter of 2009, Goldman claimed a profit of $1.8 billion. How did the banking giant do it? By magically making December disappear. In September, as the financial crisis worsened and pressure from the Fed mounted, Goldman switched from being an investment bank to a traditional bank holding company. As part of that, it had to change its fiscal year -- it used to end in November, now it ends at the close of the calendar year. That meant Goldman's latest report didn't include December -- a month in which the bank lost more than $1 billion. As reported by Floyd Norris of the New York Times, this billion-dollar tidbit was not mentioned in the text of the company's press release about its "profitable" first quarter -- it was buried deep inside the tables that accompanied the release.

The press coverage of the stunning turnaround wasn't much more edifying. For example, it wasn't noted until the 12th paragraph of the first New York Times story on Goldman's "profits" (on the jump page) that the bank had "also reported a loss of $1 billion in the month of December." A pretty relevant piece of information -- if you made it that far. The headline on the story read "Goldman Posts Profit and Plans Share Sale." No questioning, no shading. Just the facts -- as Goldman wanted them presented.

And the bank had good reason for promoting such a sunny (albeit completely manufactured) take. When you're readying to do a share sale, it helps to have the share price up, which is easier to pull off when you're able to hide $1 billion in losses.

When asked by Norris about the abracadabra make-December-disappear accounting trick, Goldman chief financial officer David Viniar practically took to his fainting couch. "We are so careful in what we try to do," he said. "We are so careful about compliance and following rules, and doing all the things we should do."

I'm sure it was unintentional, but Viniar's answer exposes the seedy truth that lies at the heart of the current crisis: The real outrage of the financial meltdown isn't about banks and corporations breaking the rules. It's that they don't have to. There's no need to break rules that are deliberately set up to allow you to legally game the system.

Take, for example, the underlying reason Goldman is raising $5 billion in stock. They desperately want to repay the $10 billion they received from taxpayers as part of the TARP program -- not because they feel bad about taking it but because the TARP money comes along with restrictions in executive compensation.

"This is a masquerade. So long as Goldman Sachs may need us again in the future, whatever bonus they are paying today is a bonus that may be covered by the taxpayer tomorrow."

And, as one of The Nation's readers points out, if Goldman were really looking after their shareholders and not the bonus pool for a handful of executives, they might think about using that money to pay off the $10 billion they owe Warren Buffett, which is costing Goldman more than the government's $10 billion due to the better deal Buffett cut for himself than Hank Paulson cut for taxpayers (a whole other reason for outrage).

Might that $13 billion have had something to do with Goldman's first quarter "profit"? Not according to Viniar. Profits "related to AIG in the first quarter," he said, "rounded to zero." Yes, but what are the chances that in a true free market system, one in which Buffett rather than Paulson made our deals, taxpayers would be paying Goldman, through AIG, 100 cents on the dollar?

What's more, Goldman has borrowed $28 billion of private money that's been backed by the FDIC -- and which doesn't come with the same restrictions as TARP funds. And, as Stanford economist Jeremy Barlow points out, "Money is fungible, and if Goldman didn't have access to the cheap guaranteed government money through the debt program, it would have been less easy for them to come up with the funds to repay TARP."

But Goldman wants to eat its bailout cake and have its executive bonuses too. Which is allowed by the rules.

See why I didn't get much sleep?

"Have we completely lost any sense of what is and is not a conflict of interest?

Have we really built a system in which greed fully overshadows responsibility? Is it not time for a complete rethink of what constitutes acceptable executive behavior?"

AIG's response to the outrage generated by the Liddy news is even more outrageous.

According to a spokeswoman there, the $3 million doesn't represent a conflict for Liddy because it's such "a small percentage of his total net worth." In other words, Edward Liddy doesn't even get out of bed for conflicts of interests worth only $3 million.

By that logic, the way to keep the Wall Street oligarchs honest is to just give them all billions of dollars. Oh wait, we're already doing that.

Pension funds are just now starting to get "uneasy" about their Wall Street investments. CalPERS, the nation's largest pension fund, has finally come to the conclusion that it should consider insisting that fees be performance-based, instead of, as the New York Times put it, "an arrangement where hedge fund managers could collect hefty fees regardless of whether the funds made or lost money."

While it's shocking that it took pension fund managers this long to come to that conclusion, it's even more shocking that they would have ever done otherwise -- especially considering that the pot of money they were giving to the Wall Street cowboys to gamble away represents the life savings of millions of people.

The change in fee arrangements comes none too soon. In 2005, 13 percent of public pension funds had money in hedge funds. By last year, that number was up to 40 percent -- while 50 percent now invest in private-equity funds.

That's a lot of government workers having their money put into a financial carny game where it's "heads I win, tails you lose."

Speaking of the relationship between private-equity funds and pension funds, turns out Steven Rattner, the head of Obama's task force for the auto industry, is under investigation by Andrew Cuomo's office and the SEC for being involved in a pay-to-play scheme between the private-equity firm he formerly ran and the New York State Common Retirement Fund. Investigators say that 20 investment firms may have been involved in pay-to-play schemes.

The three big credit rating agencies -- Moody's, Standard & Poor's, and Fitch -- stand to gain hundreds of millions of dollars in the government's latest plan to ease the credit markets.

You may remember these three as primary cast members in the ensemble production that has practically destroyed our economy. Without the AAA rating these three agencies gave to billions of dollars worth of junk, we might not be where we are today.

But fear not. Fed Chairman Ben Bernanke says he has looked at the models the three are using now and is "comfortable."

Not exactly the word I'd use. Especially since, as the Wall Street Journal notes, the ratings agencies are still paid by the companies whose products they're supposedly giving disinterested ratings to for the benefit of investors.

"Until the rating firms bite the bullet and develop forward-looking signals and methods," says former credit-rating analyst, Ann Rutledge, "it's going to be same old, same old, and their models can be gamed."

After all, them's the rules. And Ben Bernanke is "comfortable" with them.

I'm not. And you shouldn't be either. I know from personal experience that it's easy to become worn down by the steady drip, drip, drip of scandal after scandal after scandal. But our weariness plays perfectly into the hands of those who got us into the mess we are in (the same people, by the way, who remain in charge of Wall Street). They welcome our outrage fatigue. They are counting on it. Their future depends on it.

Which is why we need to stay outraged. Even if it means losing out on a good night's sleep. And you know how much that means to me.