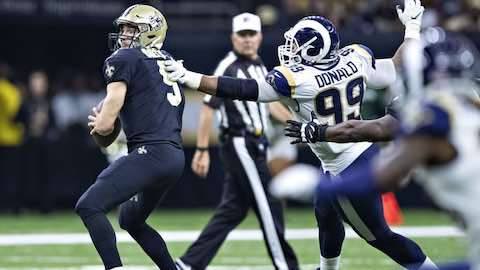 To celebrate the NFL's 100th season, each week will feature an NFL100 Game of the Week. Each game will be a nod to a momentous game played, a fierce rivalry that spans decades, a matchup of original teams and/or a game in which history was made. The Week 2 Cleveland Browns - New York Jets matchup was chosen as the Week 2 NFL100 Game of the Week because Monday Night Football, now in its 50th season, began with a Browns-Jets game -- and an American cultural institution was born.

With Keith Jackson, Howard Cosell and Don Meredith in the booth, on Sept. 21, 1970, Cleveland topped the Jets, 31-21, at Municipal Stadium. Cleveland's Homer Jones scored to open the second half on a 94-yard kickoff return and the Browns' Billy Andrews intercepted Pro Football Hall of Famer JOe Namath and scored on a 25-yard return to ice the game late in the fourth quarter. This week's game will be the 781st in Monday Night Football history.

This week's NFC Championship rematch could be a classic in the making. Fresh off a last-second victory to open 2019, Drew Brees and the New Orleans Saints travel to meet the Los Angeles Rams (4:25 p.m. ET, FOX), who defeated Carolina. It's one of six rematches of last season's playoff games on the NFL schedule. Head coaches SEAN PAYTON and SEAN McVAY, two of the top offensive minds in the game, each saw their teams score 30 points in their victorious season openers. They weren't alone in putting points on the scoreboard.

On the heels of the most prolific offensive season in its history, the NFL picked up where it left off. The league combined for 90 touchdowns, most ever on Kickoff Weekend (89 in 2002 and 2011). Teams also combined for 776 points, the third-highest total in league history for an opening week. Only the 791 points in Week 1 of 2012 and the 788 in 2002, when the NFL expanded to 32 teams, were higher. BALTIMORE led the way, heading to the halftime locker room with 42 points, the most by any team ever in a season-opening half. KANSAS CITY and TENNESSEE also posted 40-plus points in their games, marking the first opening week ever in which three road teams scored 40-or-more points. And points most certainly weren't the only common thread.

In addition to the Saints and Rams, two other Week 2 games feature matchups of 1-0 teams.

In Oakland, the Raiders can also jump to 2-0 in their division with a win over KANSAS CITY (4:05 p.m. ET, CBS). Raiders running back JOSH JACOBS became the first player since Pro Football Hall of Famer LaDAINIAN TOMLINSON in 2001 with at least 100 scrimmage yards and two rushing touchdowns in his NFL debut. Meanwhile, Chiefs quarterback PATRICK MAHOMES has more passing yards (5,759) and passing touchdowns (53) than any player ever over his first 20 games.

The Kansas City-Oakland game is one of seven division games to dot the schedule.

After an incredible comeback to defeat the New York Jets last week, The Buffalo Bills return to MetLife Stadium to play the New York Giants.

NFL Live's Victor Cruz and Rob Ninkovich preview and make their picks for Week 2 of the 2019 NFL season.

Marquise Brown, meanwhile, became the first player in NFL history with two touchdown receptions of at least 40 yards in his NFL debut.

Thirteen quarterbacks had a passer rating of 115 or higher (minimum 10 attempts). That's the most in any week in NFL history, breaking the record of 12 set in Week 3 of the 2017 season.

Overall, 15 offensive touchdowns covered at least 40 yards, an NFL record for Kickoff Weekend. The prior record was 14 in 1991.

With two more Sunday, Philadelphia wide receiver DeSEAN JACKSON (31) joined Pro Football Hall of Famer JERRY RICE (36) as the only players to record more than 30 touchdowns of 50-plus yards in NFL history.

NEW ORLEANS scored twice in the final minute to deny HOUSTON, 30-28, in a Monday night opener for the ages. In NFL history among season-opening games, Saints kicker WIL LUTZ (58 yards) recorded the longest game-winning field goal with no time remaining. Five triumphant teams erased second-half deficits. BUFFALO trailed 16-0 and won, and PHILADELPHIA trailed 17-0 before winning. The only other year in which multiple teams overcame deficits of at least 16 points to win their Week 1 games was 1999, when both Arizona and Dallas closed 21-point gaps to win on Kickoff Weekend. Also this past weekend, both INDIANAPOLIS and ARIZONA trailed 24-9 in the second half and sent their games to overtime.​