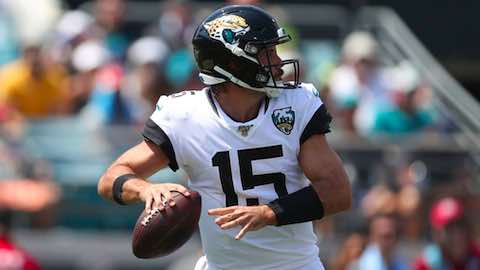 One of the more remarkable storylines of the NFL's 100th season is the NFL's sterling crop of rookies and young quarterbacks making a difference this season.

The Jacksonville Jaguars, who host the New York Jets on Sunday are the first team in NFL history to have a rookie quarterback (Gardner Minshew) with a passer rating of 95 or higher (minimum 100 attempts) and a rookie (Josh Allen) with five-or-more sacks through their first seven games.

In fact, rookies are prevalent all over the NFL as the season approaches its midway point. The 100th season is the only season in NFL history in which a rookie through seven weeks of play:

Has at least two interceptions (DEVIN BUSH, Pittsburgh, and RYAN CONNELLY, N.Y. Giants, each with two),

One of the more remarkable storylines of the NFL's 100th season is the NFL's young quarterbacks, and the amount of wins that group has generated. All told, 87 of 106 games (82.1 percent) have featured at least one starting quarterback age 26 or younger, more than any season ever through Week 7. Quarterbacks age 26 or younger have won 63 of their 116 starts (54.3 percent), 14 more wins than any prior season in league annals through seven weeks.

A look at some of the starting quarterbacks age 26 or younger this season:

Carolina quarterback KYLE ALLEN, 23, is 4-0 as a starter in 2019. He also is the first quarterback in the Super Bowl era to begin his career 5-0 without throwing an interception in his first five career starts.

Indianapolis quarterback JACOBY BRISSETT, 26, has led the Colts to a 4-2 record and has thrown at least two touchdowns in five of his six starts.

Dallas quarterback DAK PRESCOTT, 26, has paced the NFL's top-ranked offense (437.9 yards per game) with 12 touchdown passes and three rushing touchdowns. He is one of four quarterbacks to average at least 300 passing yards per game in 2019.

Only three previous seasons have had more one-point games through Week 7 since the 1970 merger. And, only three other seasons have seen more games decided by seven-or-fewer points in NFL history.

Belichick Has 300 In Sight

Entering Week 8, the undefeated New England Patriots (7-0) lead the NFL in both points for per game (31.9) and points against per game (6.9). Against the Cleveland Browns on Sunday (4:25 PM ET, CBS), the Patriots can become the first team to average more than 30 points per game and allow fewer than 10 points per game through eight games of a season since the 1962 Green Bay Packers.

With road shutouts in Week 2 and Week 7, the Patriots have two road shutout wins of at least 30 points in 2019. New England is the second team in NFL history to shutout an opponent on the road by at least 30 points on multiple occasions in a single season. Only the 1942 CHICAGO BEARS (two) can claim that distinction over a full year.

The Patriots also lead the NFL with 18 interceptions this season. Through seven games, only three clubs in NFL history have had more.

Russell Wilson On The Road Again

Dating back to Week 8 of the 2018 season, Seattle quarterback Russell Wilson has 16 touchdown passes and zero interceptions in his past seven starts on the road and his streak of eight consecutive road games with a passer rating of 110 or higher is the longest such streak in NFL history.

Gore & Peterson Rushing to the Record

On Thursday Night Football against his former team, the Minnesota Vikings, Peterson finished the game with 76 rushing yards on 14 carries and now has 13,701 rushing yards for his career surpassing Pro Football Hall of Famers Jerome Bettis (13,662) and Ladainian Tomlinson (13,684) for the sixth-most rushing yards in NFL history.

The players with the most rushing yards in NFL history:

Since entering the NFL in 2013, Houston Texans wide receiver DeANDRE HOPKINS ranks second in the NFL in touchdown receptions (50), and third in catches (577) and receiving yards (7,945).

Hopkins, who will be 27 years and 143 days old on Sunday, needs 55 receiving yards against the Oakland Raiders to become the third-youngest player to reach 8,000 career receiving yards in NFL history.

A look at the statistical highlights from Week 7 of the 2019 season.

Green Bay Packers quarterback AARON RODGERS passed for 429 yards with five touchdowns, including the 350th of his career, and no interceptions for a 158.3 rating, the highest attainable mark, and added a rushing touchdown in the Packers' 42-24 win over Oakland. Appearing in his 172nd career game, Rodgers surpassed DREW BREES (180 games) as the fastest quarterback to reach 350 career touchdown passes in NFL history.

Minnesota Vikings quarterback KIRK COUSINS passed for 337 yards with four touchdowns and zero interceptions for a 141.1 rating in the Vikings' 42-30 win at Detroit.

Baltimore quarterback LAMAR JACKSON passed for 143 yards and rushed for 116 yards with a touchdown in the Ravens' 30-16 win at Seattle.

In his Ravens debut, cornerback MARCUS PETERS registered a 67-yard interception return for a touchdown. It marked the fifth interception-return touchdown of his career, tied for the third-most by a player in his first five seasons in NFL history. Only Pro Football Hall of Famers KEN HOUSTON (nine) and LEM BARNEY (six) had more.

Arizona linebacker CHANDLER JONES had a career-high four sacks along with a forced fumble and fumble recovery in the Cardinals' 27-21 win at the New York Giants.

Chicago wide receiver CORDARRELLE PATTERSON had a 102-yard kickoff return for a touchdown in the Bears' Week 7 loss. It marked the seventh career kick return touchdown for Patterson, tied for the third-most in NFL history. Only JOSH CRIBBS (eight) and LEON WASHINGTON (eight) had more.