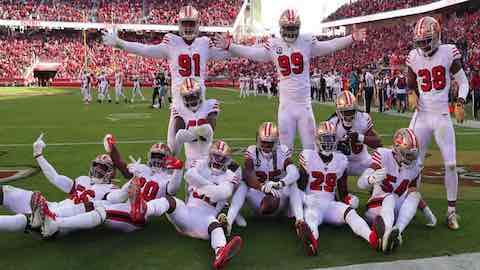 49ers Remain Unbeaten, Seahawks Up Next

For the first time in NFL history, the SAN FRANCISCO 49ERS (8-0) are the NFL's last remaining undefeated team at least eight games into a season. San Francisco, which finished last season 4-12 and selected DL NICK BOSA with the second-overall pick in the 2019 NFL Draft, is off to its best start since opening 10-0 in 1990.

This week, the 49ers host a divisional contest with key playoff implications against the Seattle Seahawks (7-2) on Monday Night Football.

The Seahawks-49ers matchup is the first meeting between division rivals that have combined for two or fewer losses in Week 10 or later since November 17, 2013, when Denver (8-1) hosted Kansas City (9-0) in an AFC West showdown.

San Francisco is the second team in NFL history to finish with a winning percentage of .250 or below and rebound to win its first eight games of the following season. In 2013, the Kansas City Chiefs opened 9-0 after going 2-14 (.125) in the 2012 season.

Last week in the Seahawks' 40-34 overtime victory against Tampa Bay, Seattle quarterback RUSSELL WILSON notched his 90th win as a starter, including the postseason. On Monday night, he can surpass BEN ROEHTLISBERGER (90) for second-most quarterback wins over his first eight seasons in the Super Bowl era. Only TOM BRADY (100) had more.

Including the 49ers' berth in Super Bowl XLVII after the 2012 season, the NFC West has produced four of the last seven NFC Super Bowl representatives. Seattle and San Francisco accounted for three of those appearances, while the Los Angeles Rams were the latest division entry in Super Bowl LIII last season. Since the beginning of that 2012 season, no other division has a better overall winning percentage.

NFL Teams to win their divisions a season after missing the playoffs over the last 16 seasons:

Best NFL Teams After The Bye

A season-high six NFL teams are on byes during Week 10, and every club will have taken its week off by the end of Week 12. On Sunday, two teams coming off their byes meet in an NFC South clash when the ATLANTA FALCONS travel to play the NEW ORLEANS SAINTS. Since the beginning of the 2011 season, only the BALTIMORE RAVENS, fresh off a post-bye win over the Patriots in Week 9, have a better record after the bye.

The NFL teams with the best winning percentages in the game following the bye since 2011:​

On Sunday when the BALTIMORE RAVENS meet the CINCINNATI BENGALS (1:00 PM ET, CBS), the Ravens (6-2) have an opportunity to match their best start in franchise history (7-2 in both 2006 and 2012). On the other sideline, quarterback RYAN FINLEY will make his first NFL start. Finley will become the sixth rookie to make his starting debut this season, joining Arizona's KYLER MURRAY, Jacksonville's GARDNER MINSHEW, Pittsburgh's DEVLIN HODGES, the New York Giants' DANIEL JONES and Washington's DWAYNE HASKINS.

Through the first nine weeks, 110 of 135 overall games (81.5 percent) have featured at least one quarterback under the age of 27, the most at this point in a season in league history. In total, quarterbacks under age 27 have started 146 games and recorded 76 wins (52.1 percent), both the most starts and wins by quarterbacks under the age of 27 through the first nine weeks of a season since at least 1970.

The Baltimore Ravens (6-2) enter Week 10 leading the NFL with an average of 204.9 rushing yards per game in 2019. Last week in their win over New England, quarterback LAMAR JACKSON, whose 637 rushing yards are the most by a quarterback through his team's first eight games of a season in NFL history, rushed for 61 yards and two touchdowns, while running back MARK INGRAM rushed for a season-high 115 yards. The team totaled 210 rushing yards in the victory -- their seventh game with at least 150 rushing yards this season.

The NFL teams with the most games with at least 150 rushing yards in the first nine games of a season since 1970:

In Week 6, Baltimore rushed for a season-high 269 yards against Cincinnati. If the Ravens rush for their season average (204.9) on Sunday in Cincinnati, they would move into the top five for most rushing yards in a team's first nine games of a season since 1970.

The NFL teams with the most rushing yards through their first nine games of a season since 1970:

Arizona quarterback Kyler Murray leads all NFC rookies in passing yards (2,229) and passer rating (89.2), while ranking second among all quarterbacks with 313 rushing yards in 2019. Earlier in the season, Murray -- who was selected with the first-overall pick in the 2019 NFL Draft -- became just the second quarterback to pass for at least 300 yards in each of his first two career games in NFL history.

The NFL quarterbacks with at least 2,500 passing yards and 250 rushing yards in first 10 career starts in NFL history:

Earlier this season, Detroit Lions quarterback MATTHEW STAFFORD became the first quarterback in NFL history to reach 40,000 career passing yards in fewer than 150 games. Over the past three weeks, Stafford leads the NFL in passing yards (1,112) and passing touchdowns (10) and has passed for at least 300 yards and three touchdowns in each of his past three games.

The NFL quarterbacks with the most games with at least of 300 passing yards and three touchdowns in their first 150 career games in NFL history:

Carolina Panthers running back Christian McCaffrey leads the NFL with 1,244 scrimmage yards through eight games this season and joined Pro Football Hall of Famer JIM BROWN (1963) as the only players to have at least 150 scrimmage yards and a touchdown in six of their team's first eight games of a season in NFL history.

The NFL players with the most scrimmage yards through their team's first nine games of a season in NFL history:

The NFL players with the most games with at least two rushing touchdowns in their first 10 career games in NFL history:

The NFL players to reach 400 receptions in the fewest games in NFL history:

>Thomas, who is currently in his fourth NFL season, needs seven receptions on Sunday to surpass JARVIS LANDRY (400) for the most receptions through a player's first four seasons in NFL history.

The NFL players with the most receptions in their first four seasons in NFL history:

Packers Party In The Backfield

The NFL teammates to each record at least 10 sacks through their team's first 10 games of a season since 1990: