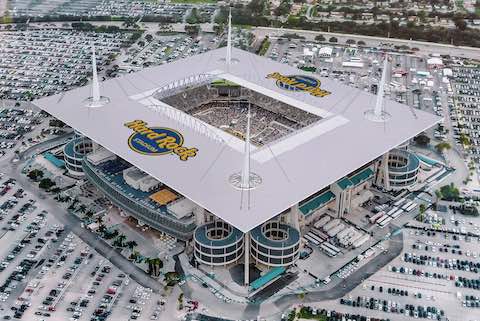 "I can't think of a better place to host the Super Bowl than right here in our world-class community," Miami-Dade County Mayor CARLOS GIMENEZ said. "Miami has hosted more Super Bowls than any other city, and it's clear why. This is the place to live, work and play, and hosting the Super Bowl once again serves as further evidence that Miami is a major event community."

The facility completed a $550 million, multi-year renovation privately funded by Dolphins managing general partner & chairman of the board STEPHEN ROSS to transform the iconic venue into the best Miami has to offer in world-class fare, art, culture and an elevated guest experience.

Ross and his organization will host the Super Bowl for the first time since SEAN PAYTON, DREW BREES and the New Orleans Saints defeated the Indianapolis Colts, 31-17, in Super Bowl XLIV on February 7, 2010. The game will be played in Miami for a single-city record 11th time.

In addition to the Saints' Super Bowl victory to close the 2009 season, Miami also hosted…

- The only Super Bowl with an MVP from the losing team (LB CHUCK HOWLEY of the Dallas Cowboys, Super Bowl V).

- The 49ers' triumph over the San Diego Chargers in Super Bowl XXIX, where Pro Football Hall of Famer STEVE YOUNG was able to say in the closing seconds, "Someone take the monkey off my back."

The locations and the number of Super Bowls they have hosted.