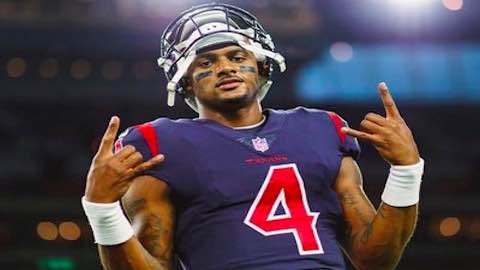 The best and most notable performances from Week 9 of the NFL 2019 Season.

Houston Texans quarterback Deshaun Watson completed 22 of 28 pass attempts (78.6 percent) for 201 yards with two touchdowns and zero interceptions for a 120.4 rating in the Texans' 26-3 win over the Jaguars at Wembley Stadium in London.

Watson is the third quarterback to throw at least two touchdowns and complete at least 75 percent of his passes in an international NFL game, joining TOM BRADY (November 19, 2017) and RYAN FITZPATRICK (October 30, 2011).

Bills quarterback Josh Allen recorded a 110.4 passer rating and had both a passing and rushing touchdown in the Bills' 24-9 victory over Washington.

Sunday marked McCaffrey's sixth game of the season with at least 150 scrimmage yards and a touchdown, joining JIM BROWN (1963) as the only players with six such performances in their team's first eight games of a season in NFL history.

McCaffrey has seven games with both a rushing and receiving touchdown in his first three seasons, tied with ABNER HAYNES (1960-62) for the second-most such games in a player's first three seasons in league annals. Only CHUCK FOREMAN (eight games from 1974-75) had more.

Oakland Raiders rookie running back Josh Jacobs totaled 120 rushing yards and two touchdowns in the Raiders' 31-24 win over Detroit. Jacobs is the first rookie since Cincinnati's ICKEY WOODS (1988) to have at least two rushing touchdowns in three of his first eight career games.

Rookie tight end FOSTER MOREAU and rookie wide receiver HUNTER RENFROW each recorded a touchdown reception on Sunday. Along with Jacobs' two touchdowns, the Raiders are the first team since the SEATTLE SEAHAWKS (November 22, 2015) to have rookies score all four touchdowns in a victory.

Pittsburgh Steelers wide receiver Juju Smith-Schuster had three receptions, including his 200th career catch, in the Steelers' 26-24 win over the Colts.

Kansas City Chiefs kicker Harrison Butker made a game-tying 54-yard field goal with 2:30 remaining and converted a game-winning 44-yard attempt as time expired in the victory, becoming the first kicker since MARTIN GRAMATICA (October 27, 2002) to make a game-tying field goal of at least 50 yards and a field goal of at least 40 yards to put his team ahead for good with both coming in the final three minutes of the fourth quarter.

Philadelphia Eagles tight end Zach Ertz, appearing in his 100th career game, had nine receptions for 103 yards and a touchdown in the Eagles' 22-14 win over Chicago.

Ertz has 483 career receptions, the third-most by a tight end through his first 100 games in NFL history. Only Pro Football Hall of Famer KELLEN WINSLOW SR. (497 receptions) and JIMMY GRAHAM (485) had more.

Seattle Seahawks quarterback Russell Wilson passed for 378 yards with five touchdowns and zero interceptions for a 133.7 rating in the Seahawks' 40-34 overtime victory against Tampa Bay. Wilson has 90 wins, including the postseason, since entering the NFL in 2012, tied with BEN ROETHLISBERGER (90) for the second-most wins by a quarterback, including the postseason, in his first eight seasons in the Super Bowl era. Only TOM BRADY (100) had more.