A Beeswax Balm You Can Make Yourself at Home 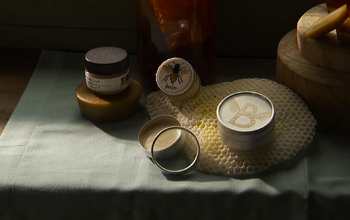 Beeswax lip balm is easy to make at home using beeswax from a farmer's market and few common kitchen implements and ingredients. Adorn your own lidded containers for storing it

There are some things our technologically advanced society just can't improve on. The honeybee is one of them.

Since ancient times honeybees have been kept and appreciated not just for their honey but also for the waxy multi-cell comb they produce to store it in.

Melted honeycomb produces what we commonly refer to as beeswax, a material that since ancient times has been put to many different uses, from manufacturing to food production to the arts. Its waterproof properties made it useful in shipbuilding and sail making. It was melted and used as a protective layer for foods such as cheeses, and was also used to seal bottles. Easily molded, beeswax was also used to make sculptures for the "lost wax" process. Figures were sculpted out of wax and then covered with plaster. The wax was then melted away, leaving a hollow form that could be filled with molten metal.

By now beeswax has been largely displaced from these traditional uses by newer materials and techniques, but it remains much in demand for specialty products that take advantage of its unique qualities. Beeswax candles, for example, burn largely without producing the smoke and dripping characteristic of other candles. Beeswax is for it's emollient, softening and antibacterial properties. Thus it's a common ingredient in skin care products such as moisturizer and lip balm.

Brenda Brock, owner of Farm Aesthetics, a company that creates organic skincare products for select spas, boutiques and high-end hotels such as the Four Seasons, stopped by to tape a segment of this week's episode of "Cultivating Life." Brenda shared a simple recipe for lip salve that combines local beeswax and fresh herbs from the garden, which is described below.

Beeswax can be found at craft stores, candle shops and higher-end grocery stores. Some drugstores and big box stores even carry it. I'd recommend heading out to a local farmer's market or looking online to find a beekeeper operating in your area. Honeybees are raised virtually everywhere in the U.S., and at many farmer's markets you'll find several vendors with honey and various beeswax products. (An added advantage of buying it at a farmer's market is that you'll probably be able to find lemon balm there, too.)

The tools you'll need to make Brenda's beeswax lip balm include a quart-size storage jar with cover, a strainer, some cheesecloth, a double boiler, and small new or recycled containers for the finished salve.

Start by putting lemon balm leaves in the jar, then pour over the almond oil and add the vitamin E. Cover tightly and set aside mixture for a week, or longer, in a dark place. This will allow the essential oils of the lemon balm to infuse the almond oil.

In a double boiler, combine infused oil and beeswax. Heat gently (but do not boil) until the beeswax is melted. Remove from heat and add grapefruit essential oil. Pour into tiny lip pots or jars. Allow to cool, cap securely.

To use: apply small amount with fingertips to lips. Always keep lip balm free from water or moisture and close the lid tightly between uses.

Home Crafting - A Beeswax Balm You Can Make Yourself