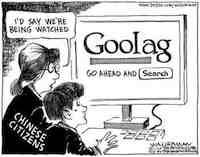 Google launched its operation in with high hopes. The democratizing benefits of increased Web access for the Chinese people, the Internet giant hoped, would outweigh the ferocious censorship and e-mail spying.

Google also hoped to make shiploads of money. Lawmakers and human rights activists criticized the company's willingness to abandon its informal "Don't Be Evil" motto of social responsibility for the sake of short-term wealth. Still, cofounder and other company officials maintained that even a censored version of the company's search engine was better than none at all.

But that was then. Google has startled the planet by threatening to walk away from the world's fastest growing economy. Last week the company threatened to shut down its -based site over censorship and e-mail hacking. The attacks were made against Google, the company said, and at least 20 other large companies that included "the Internet, finance, technology, media and chemical sectors."

Could this be the end of Google in ? Not quite. Although Google announced on , "We have decided we are no longer willing to continue censoring our results," two days later company spokesman sang a different tune. Google's business in would continue unchanged, he said, pending talks with the government to see if the company can legally operate without filters.

You can tell a lot about a regime's paranoid anxieties from what it censors and how much. Media censorship in centers mainly on what one of my American journalism colleagues during a recent visit to called "the four T's: Tibet, , torture and Tiananmen," as in the historic uprising that the government violently put down.

A Chinese colleague politely corrected him. "I think is becoming OK now," he said. But who knows? Even the officials and bureaucrats who enforce the rules have a hard time keeping up, which only adds to the regime's power. They don't need to censor you on every little thing if they can intimidate you into censoring yourself.

Will Google's line in the sand blow away in the breeze? Significantly, its announcement expressed less alarm over censorship than over cyber attacks that "resulted in the theft of intellectual property." That's worth pulling out of if the most likely suspect, government, is behind it.

"Intellectual property" includes the innovative knowledge and ideas that put a company ahead of its competitors. It also includes the defense industry that puts a nation ahead of other nations.

That may be the real story behind Google's pushback against the Chinese government. It follows a series of aggressive moves by government that espionage and foreign policy experts say could be the opening rounds in an escalating 21st-century cyber-war.

A report to two months ago by the cited a "marked increase" in "malicious" cyber intrusions originating in and targeting U.S. government and defense-related computer systems. Unable in their repressive political environment to incubate and innovate enough new private-sector ideas of their own, experts say, steals ours.

Google's leverage in its dispute with government may be its own popularity. Even though it runs a distant second in popularity to home-grown Baidu search engine, recent news photos of fans laying flowers at Google's headquarters visibly symbolize millions of users who want more choices and more information access, not less. The Communist regime does not allow free elections, but experts say it pays no less attention to public opinion polls than the free world's politicians do.

"I think Google probably should negotiate with the Chinese," Cheng Li, a senior fellow on foreign policy at the , told me in a interview. "The fight for public opinion is going on. Who will be the winner is really unclear. So the government must be very careful. If they do too much (against Google), the backlash against them could be overwhelming."

Welcome to the new century. It is a time when global warfare is fought silently over the Internet, companies compete with national governments for the hearts and minds of the people and it is often simpler to know what avoids evil than to know what's going to do the most good.