Expensive Lesson: Gun is Not a Joke - Gilbert Arenas 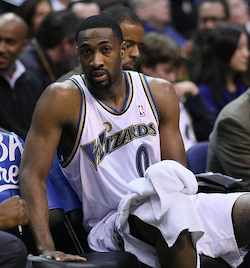 The astonishing thing is that he did it even after.

Even after news broke that he had brandished guns in the locker room of the NBA's Washington Wizards at a practice.

Even after meeting with federal prosecutors and local police investigating his violation of the city's gun laws.

Even after being criticized by the Rev. Al Sharpton, NBA legend Karl Malone, and an army of fans, sports columnists and TV commentators.

Even after apologizing to his team, his fans and the NBA and saying he understood the seriousness of the matter.

Even "after" all that, Gilbert Arenas somehow managed to take a disaster and make it worse.

It happened in Philadelphia. Every team has its pregame rituals: some chant, some dance, some box or high five. With his career and even his freedom hanging in the balance for a misadventure with guns, Arenas stood at the center of his team's huddle, made his hands into pistols, and pretended to shoot his teammates.

In a widely circulated photo of the incident, he's laughing and they are, too. But NBA Commissioner David Stern didn't get the joke. Stern, who had said he would delay judgment until authorities finished their investigation, promptly handed down an "indefinite" suspension without pay. Arenas, said the commissioner, is "not currently fit" to play.

The All-Star guard is in the midst of a contract worth $111 million. The calculates that he will lose $147,000 for each game he sits. The speculation is that he could be sitting the rest of the season -- or longer. Which will leave him plenty of time to make his court dates.

This all reportedly grows out of an incident on the team plane wherein Arenas ribbed a teammate, Javaris Crittenton, for losing money in a card game. Crittenton took exception and the argument escalated with him half-jokingly threatening to shoot Arenas in the surgically repaired knee that sidelined him most of the last two years.

Two days later, Arenas hauled out four unloaded pistols, which he says he kept in his locker because he didn't want them around his children. He placed the guns near Crittenton's locker with a note: "Pick one."

Arenas, a free spirit and self-described "goofball," says this was meant as a joke. Crittenton didn't laugh. According to eyewitnesses, he produced his own gun and loaded a clip. Crittenton denies it.

And here, it seems worthwhile to offer a reminder: the leading cause of death for black men 15 to 34 is homicide, usually by gunfire, usually at the hands of another black man. Arenas is 28, Crittenton, 22. Both are black.

Granted, stupidity knows no color. And yet ... it is difficult to think of these two guys whipping out guns like something out of Dodge City and not see shadows of all the other men of the same heritage and age group who once were here but now are gone because they regarded guns in the same profoundly unserious manner. Because they saw them not as tools of hunting or self-defense but, rather, as toys -- as argument settlers and point makers, as extensions of their personal reproductive gear, as a means of demanding respect.

We have paid the price for that idiotic mindset in funerals. Funerals, an endless string.

So it is troubling to see these two boy men unable to let it go, even in the midst of lives most people would consider wildly successful. And it is downright appalling that Arenas could not grasp the seriousness of the matter even with his very future at stake.

A gun is not a joke. Maybe he gets that now. But look at what it cost him to learn: his livelihood, his reputation, maybe his freedom. But even at that, you could argue that Arenas is a lucky man. Some of us have seen funerals in an endless string so we know:

It could have cost him a whole lot more.