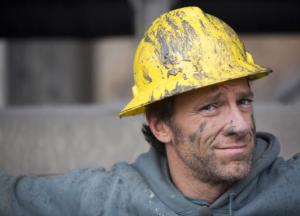 Mike Rowe's moment of illumination was properly cringe-inducing for a man whose television show is called Dirty Jobs.

The articulate and intrepid Discovery Channel star was in the middle of a lamb castration, weighing the widely used method of wrapping bands above the animal's testicles to cut off circulation against the method he had just witnessed -- with dismay -- which involved teeth. However unorthodox, the latter approach was quick and seemed relatively painless for the lamb, while the former had left the lamb temporarily immobile.

Stripped of his highbrow disapprobation, Rowe, naturally, had to put his own teeth to use. So much for making judgments.

Throughout the course of the show, Rowe, 47, has parachuted into incredibly dirty jobs, including coal miner, shrimper, and even skull cleaner, paying tribute to the value and integrity of manual laborers as he sloshes around in knee-high nastiness right beside them. U.S. News recently chatted with Rowe about dirty jobs and MikeRoweWorks.com, his website dedicated to promoting blue-collar work and drawing attention to impending worker shortages in the skilled trades.

What is the plan for MikeRoweWorks.com?

I always wanted there to be something like a MikeRoweWorks, some sort of initiative that could capture the larger themes that were always present on the show and put a point on them. ... We're just challenging the basic notion of what a good job is and what it means to be not just gainfully employed but engaged and balanced. There really are an amazing number of lessons that people wind up gravitating toward and talking about after they watch this show. And it always comes down to what do these people know that the rest of us don't, and why are they having more fun than I am, you know, in my nice job with my nice surroundings and my nice paycheck? Why does the guy picking up roadkill seem like a more enjoyable sort to sit down and share a beer with?

You're also challenging the concept of work.

On a personal level, absolutely, because I'm historically an opportunist and a bit of a layabout. The irony is that I am associated with a guy who talks about work all of the time, and in fact I've spent most of my life trying to avoid it. This show was a tribute to my granddad and my father. My granddad died a couple of years ago, but he saw it debut, and my father still calls every Wednesday, just laughing. He's like, "I can't believe it. I saw you on the fish boat. No life vest, by the way, moron. Saw you in the mine with no hard hat, idiot."

What did he do for a living?

For money, he was a public-school teacher. But practically, he was my grandfather's apprentice. My granddad lived next door to us--we had a small farm outside of Baltimore. My granddad was one of those guys who is magically born hard-wired, as an electrician, a plumber, an architect--he was all those things--a mason. He could build or fix anything. He only went to the eighth grade. He just had the gene and I didn't. When he had a stroke in his early 60s, he kept working, and my dad sort of became his hands. So my memories growing up are of these two guys waking up clean and going off to fix something and coming home disgusting, problem solved. I was always in awe of that. I just couldn't do it. So naturally, I joined the opera and got into show business.

You must take the show pretty seriously--preparing and researching for each episode.

I did in the first season. It's funny; it's a real balancing act. In TV, everybody's talking about authenticity. In order to make Dirty Jobs authentic, I really can't be overly informed. The minute I am, I become a host. ... It's a very tricky business paying a tribute to work, because TV is very bad at it. We generally turn people, when we portray them, into these heroes, which they rarely are, or punch lines, which they rarely are.

The plumber stereotype, for example.

If he's on TV, I guarantee you his tool belt is riding low, his ass is hanging out, and he doesn't know a lot of words. Joe the Plumber pissed off a lot of people because he appeared to challenge a lot of stereotypes of what a plumber is supposed to be. Whether he was or he wasn't, I don't know--but when you challenge the stereotype that directly, it makes people uncomfortable.

The "experts" on your show are the guys with the dirty jobs. Wouldn't you say this is one of the only shows where these guys have the upper hand?

I wouldn't say they're experts. I would just say they know what they're doing. I'm never looking to put anybody on the show in any position other than being themselves, of being competent at what they do and having the ability to talk about the good, the bad, and the ugly. It can't all be apologetics. You start wrapping people in the flag and singing "Look for the Union Label," and, you know what? That sucks. Because sometimes work really is hard, and it really is a drag.

The thing that makes Dirty Jobs different is that it's one of the few shows that portrays work in a way that doesn't highlight the drudgery. Instead, it highlights the humor. If you're flicking around with no volume, the odds are good that you'll see people doing something that appears to be really challenging and really adverse, but they also appear to be laughing and having a good time in the process. That's really about the simplest message that I can hope the show will impart--that in our haste to build up what a good job is and to reward our own decisions, we need to marginalize all of the other choices that people make. That's just how we build ourselves up, in every way, but it's a really stupid thing to do professionally. Because when the investment bankers come home and flick on the lights, they want to see light. And when they flush the toilet, they want to see the poo go away. And when those two things don't happen ... all of these things that we've built for ourselves and all of these conveniences we've come to associate with success are kind of worthless.

So when the president talks almost romantically about putting people to work building wind turbines and installing solar panels, is that music to your ears?

Well, it's music, all right. Like Philip Glass. Politically, there's no smart response for me. I'll plead my record. I basically took the position a year ago that Dirty Jobs was the greenest show on television, by far. I theorized, on camera, that it didn't get any love in that regard because unlike every other green show, we made no claim to be green at all. What if the greenest people on the planet were the people with dirty jobs? And what if so much of the tension in the environmental movement was coming from the fact that a huge percentage of the country was being asked to accept role models that didn't resonate with their core beliefs? What if, for instance, millions of people in the heartland didn't cotton to Leonardo [DiCaprio], or maybe weren't comfortable with Vice President Gore, or just looked askance at any idea that came out of Hollywood or the beltway?

I figured, maybe we've got some great role models on Dirty Jobs. You don't see it because they're too busy making a living doing what they do. There are other things that are more important to them than saving the planet--namely making a living and taking care of their family. The more I looked back at shows, everywhere I looked, I saw examples of brown before green. Matt Freund, who makes flowerpots out of cow s--t in northwest Connecticut. He started doing it because nobody was buying his milk. Now, he's buying more cows because he needs more crap. How much browner could you get? It's a completely environmental play, and yet this guy is covered in crap 24-7 and making a fair amount of green as a result. But it all happened because of his personal economy, not because he was looking to leave a lighter footprint.

Completion is a big one. Most "good jobs" don't have a lot of visual cues in the course of your day or your week or your month to let you know how you're doing. We learn how we're doing by performance reviews and a whole lot of things more complicated than looking down and seeing a ditch where there wasn't one. I just think it's in our DNA to know when we're done. ... I think all the D's are bad--drudgery, drone, dismay, depression. We do ourselves such a disservice in this country when we portray work in that way, and yet we're helpless to not do that. It's what we do. We've waged war on work. We have collectively agreed, stupidly, that work is the enemy.