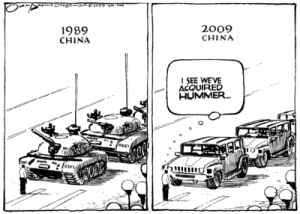 On May 1989, I was a 20-year-old history student at Beijing University.

By June 13, my name was at the top of the list of the 21 "most wanted" student leaders of the Tiananmen democracy movement. I was arrested and spent nearly four years in jail, re-arrested in 1995, and then was exiled to the United States in 1998.

Secret memoirs have just been released by Zhao Ziyang, the general secretary of the Communist Party who lost a power struggle with hardliners in 1989 and died under house arrest.

Zhao's writings reveal his conviction that our demands for economic and human rights reform were not only reasonable but could have accelerated China's modernization.

I believed then and I believe now that the reforms my fellow students and I were advocating are the central challenges shaping China's destiny today.

Decades have passed since our landmark demonstrations in Tiananmen Square for democracy and free speech and against corruption. And during this time, China has changed in important ways.

Economic reforms have allowed millions of Chinese people to lift their families out of poverty, and many in China find their lives changed for the better.

But the central causes the Tiananmen generation, students and citizens alike, took up remain unresolved: corruption, workers' rights, free speech and the need for government reform to address the needs of China's 1.3 billion people.

Today in China, corruption is endemic because the Chinese Communist Party and its vast network of officials remain above the law.

Workers still face rights abuses, a problem likely to grow as the global economic downturn affects factories, sending home many millions of migrant laborers. The Chinese government's censorship of free speech is a central concern as the advent of the Internet gives voice to both youth and critics.

China's economic growth has not led to liberty, a free press or democracy.

On the contrary, like Deng Xiaoping and Jiang Zemin before him, Chinese President Hu Jintao has invoked economic development to justify suppressing the Tiananmen protests and for maintaining one-party rule.

Riddled with corruption, the system has benefited a privileged few, with local party secretaries becoming capitalists overnight and using their political power to accumulate huge sums of money derived from the profits of state-owned enterprises.

Our demonstrations in the spring of 1989 hit a nerve among the Chinese population.

Within weeks, joyful and peaceful protests took place across major cities, involving not just students, but factory workers, academics and even employees of government-controlled newspapers and television stations.

For me, it was the proudest moment in China's long history.

For the first time in our lives, people dared to exercise the most basic human right: freedom of speech.

On the night of June 3, the army moved in to clear Tiananmen Square, and the ensuing military crackdown became another bloodstained page of China's turbulent history.

We still do not know how many people were killed in the square.

The government said only soldiers and some citizens were killed, but we have photos of hundreds of demonstrators crushed along Changan Ave. and of bodies lying in the morgues at Beijing's hospitals.

In the past decade, I have watched from afar as China has reasserted its role on the world stage. The economic growth is impressive. Last year's Beijing Olympic Games gave China the global profile the leadership so clearly wants for legitimacy.

But what about media censorship, which contributed to the number of victims of the tainted-milk scandal?

And government corruption, which led to shoddy construction practices in Sichuan and devastating consequences during last year's earthquake?

Or the widening gap between the rich and the poor?

These issues, all raised by the students in Tiananmen Square 20 years ago, remain unaddressed.

China' power is limited to the "yang," or hard power of military and economic might, whereas in the 21st century the "yin," or soft power based on moral principles and human rights, is equally important.

The Chinese people yearn not just for economic benefits but also for basic human rights.

A pro-democracy manifesto called Charter 08, released online last December, has already garnered thousands of signatures despite every effort by the Chinese government to block its distribution and punish its authors.

Leading intellectual Liu Xiaobo, one of the charter's signatories, was detained last December and is still being held with no legal justification. Liu, who spent nearly two years in jail after the Tiananmen protests, was an inspiration to us in 1989 and remains so today.

The Chinese government should take four steps if it wishes to convince the world it is a "responsible power."

First, it should pay reparations to the Tiananmen mothers who lost their children forever.

Second, the government should allow me and other forcibly exiled Chinese citizens to return to our homeland.

Third, the government should release the remaining political prisoners who were jailed for peacefully protesting in Tiananmen Square and more recent prisoners persecuted for their efforts to encourage human rights reform.

Finally, China's leaders should address the long-term objectives shared by the Tiananmen students and the authors of Charter 08 -- establishing the rule of law, guaranteeing basic human rights and ending corruption.

Only then can China begin to turn the tragic page of Tiananmen.

Wang Dan was a student leader of the Tiananmen protests in 1989. He was exiled to the United States in 1998 and received his Ph.D. in history from Harvard University in 2008.