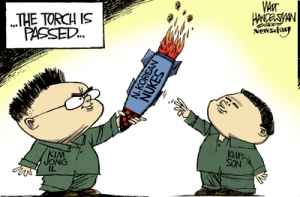 A former dean of the Kennedy School of Government, at Harvard University, Nye is author of "Soft Power: The Means to Success in World Politics."

You were intimately involved in the first missile crisis with North Korea back during the Clinton administration, and so have the long perspective.

Nothing seems to work in containing North Korea's nuclear ambitions. Neither engagement nor isolation has prevented them from firing more long-range missiles or testing their nuclear weapons.

Now the international community has moved one step further with a U.N. resolution that stiffens sanctions, allowing interdiction of suspect North Korea ships, and the U.S. has explicitly extended its nuclear deterrent umbrella over South Korea.

Aren't these moves a de facto admission that North Korea is a nuclear power that can't be disarmed, only prevented from proliferating?

The North Koreans have exploded two nuclear devices, which, yes, makes them a de facto nuclear power in the short run.

However, the U.S. and its allies want to retain our long-run policy goal of a de-nuclearized Korean peninsula. The steps taken so far by the U.N. are appropriate to deal with the short-term reality. But they do not signify an acceptance of the legitimacy of North Korea as a nuclear weapons state -- which is what the North Koreans want. This is an important distinction.

The legitimacy they seek includes bilateral negotiations with the U.S. and direct security guarantees from the U.S. They also want to be treated like India -- considered a legitimate nuclear state -- by the U.S. In other words, through their nuclear tests they seek to enhance their status and reaffirm their regime. This is an illusion on their part.

They will not get that as long as they don't dismantle their nuclear program. All they will get are negative constraints.

Yet, again, neither engagement nor isolation has moved them toward disarmament. What can possibly move them?

It is by now a cliche to say that greater pressure from China can force North Korea to change.

The problem is that China has two objectives: They want a de-nuclearized North Korea, but they also want a North Korea that doesn't collapse into chaos on their borders. The consequence of these cross-purposes is that the Chinese have been reluctant to use the leverage they have.

For that reason, I believe it would be wise for the U.S. to initiate private, quiet discussions with the Chinese about how we would respond if the North Korean regime collapses. The U.S. should discuss with China whether U.S. forces would go up all the way to the Yalu River, or how we and the international community might help cope with the expected refugee deluge.

Discussing China's worst fear of North Korean collapse, developing scenarios to cope with it, and reassuring them that we won't take advantage would help remove their reluctance to press North Korea hard on getting rid of their nuclear weapons.

The reality of North Korea as a de facto nuclear power with missile delivery systems has prompted some key Japanese leaders and defense officials to talk openly of developing a pre-emptive capability to attack North Korea and for Japan to go nuclear itself -- to develop its own deterrent.

If we are to be realistic, won't North Korea's insistent belligerence sooner or later push Japan past the nuclear brink?

I don't think Japan's nuclearization is inevitable. After all, the Japanese have long had the capacity to go nuclear whenever they want.

But they've made the decision not to do so because of domestic public opinion -- some 80 percent oppose that option -- and because going nuclear would make Japan less secure in the end. If Japan developed nuclear weapons, it would frighten their other neighbors in East Asia, which might then see Japan, given its history, as a hostile threat. To develop a second-strike nuclear deterrent would be destabilizing.

Now, of course, this would all change if America dropped its alliance with Japan, or if America's extended nuclear deterrent, which now covers Japan, would lose its credibility. Then Japan's nuclearization would be likely.

Those Japanese leaders arguing for nuclearization say that a nuclear North Korea is every bit as much of a threat to them as were the Soviet missiles aimed at the U.S. during the Cuban Missile Crisis. If push came to shove, they are uncertain that the U.S. would sacrifice Los Angeles for Tokyo.

If you look at the history of the Cold War, this exact argument was made about Berlin. Would the U.S. sacrifice New York to save Berlin? There were many who doubted that the U.S. could or would defend Berlin since the nearby Soviets had conventional superiority as well as the long-range nuclear threat against the U.S. itself.

In fact, Berlin was saved. Ultimately, of course, Berlin became the capital of a free Germany when the Wall came down.

This history of the Cold War shows that the dilemma of sacrificing L.A. for Tokyo is a false one. You are not sacrificing L.A., but accepting a small degree of risk in return for the security and stability of East Asia. Can the U.S. be counted upon to do that still? The answer is yes.