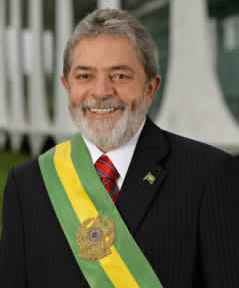 Brazil, Latin America's biggest country, has received well-deserved praise in recent years for its responsible economic policies. But, increasingly, it is coming under fire for its shameless support for dictatorships around the world.

There is hardly a dictator -- or repressive government -- that Brazil doesn't like, human rights groups say.

President Lula is taking his policy of not engaging in fights with other countries too far, critics say.

Last year, after Venezuelan President Hugo Chávez had closed down his country's biggest independent television station, RCTV, Lula told the German magazine Spiegel that ``Chávez is without a doubt Venezuela's best president in the last 100 years."

Similarly, after meeting with semi-retired dictator Fidel Castro during a visit to Cuba in January 2008, Lula said he hoped Castro would soon return to assume his "historic role," and praised his ``incredible lucidity."

More recently, Brazil's votes at the U.N. Human Rights Council often have been more aligned with totalitarian countries than with left-of-center Latin American democracies such as Argentina, Uruguay and Chile. Among recent examples:

-- In May, Brazil abstained in a vote on a Cuba-sponsored resolution aimed at stopping the council from monitoring human rights violations in Sri Lanka, where the U.N. high commissioner for human rights had denounced widespread war crimes. By comparison, Argentina, Chile, Mexico and the European Community voted for the continuation of the probe.

-- In March, Brazil abstained in a similar vote on whether to continue U.N. human rights monitoring of North Korea, where U.N. monitors were looking into reports of executions and huge detention camps. By comparison, European countries, Argentina, Chile and Uruguay voted in favor of continuing the U.N. monitoring mission.

-- Also in March, Brazil abstained in a European Union-sponsored vote to stop an African proposal aimed at weakening U.N. probes into abuses in the Republic of Congo. By comparison, Argentina, Chile, Uruguay and even hard-line leftist Nicaragua voted in favor of continuing the probes.

-- In February, during the council's review of Cuba's human rights situation, Brazil said it "welcomes" Cuba's "constructive stance" in the U.N. human rights system and did not specifically mention that country's political prisoners, or the absence of freedom of the press and other fundamental rights.

Vivanco added that, in Latin America, ``Mexico is a model country when it comes to its foreign policy stands on human rights, followed by Chile, Argentina and Uruguay. Brazil is at the other side of the spectrum."

Asked about the growing criticism of Brazil's foreign policy, Lula's presidential advisor Marco Aurelio Garcia was quoted by the daily O Estado de Sao Paulo on June 14 as saying, "Brazil doesn't have to be handing out certificates of good conduct or bad conduct around the world." He added, ``We think it's much more important to take positive actions that can move a country toward improving its internal situation than actions of a restrictive nature."

TIME FOR A CHANGE

Brazil -- and its president -- deserve a lot of credit for becoming a model of economic stability, poverty reduction and political freedoms in a region where many other countries are going backward on all three fronts.

Brazil should adhere to its commitments under international treaties to defend universal human rights and democratic principles, and stop praising dictators. If Lula continues to turn a blind eye to human rights abuses around the world, he will be setting a precedent for future governments to crush human rights in his own country.

P.S.: Late last week, perhaps as a result of human rights groups' criticisms, Brazil cast a rare vote alongside pro-human rights countries at the U.N. Council on Sudan. Let's hope this marks the beginning of a change in Brazil's awful foreign policy