The inauguration of the first black president will long be remembered as a momentous day in history, but many past inaugurals also have had their memorable moments.

Even Barack Obama's arrival in the nation's capital aboard a special train recalls his fellow Illinoisan Abraham Lincoln's similar train ride in 1861. Lincoln had to travel the last part of the trip at night because of an assassination threat in Baltimore.

Inaugurals are a mixture of pomp, festival and gravity, the American equivalent of a coronation. Their rituals are laden with symbols of national purpose, continuity and unity. For 220 years, they have marked the peaceful transfer of power, a feat few other countries have achieved.

Presidents have tinkered with the ceremony to reflect their personal style and the state of the nation.

Almost always the day has featured a solemn swearing in, an inaugural address, one or more parades, plus parties, receptions and fancy balls far into the night.

The heart of the affair is the inaugural oath, first recited by George Washington on the balcony of New York City's Federal Hall, the original seat of government, on April 30, 1789.

The 35-word oath is prescribed in the Constitution, but Washington added the phrase "So help me God," and placed his left hand on a Bible hastily borrowed from a Masonic Lodge on Wall Street. Most later presidents have followed the founding father's precedent.

Washington's successor, John Adams, took the oath in Philadelphia's Independence Hall. Thomas Jefferson did it in the new Senate chamber in the District of Columbia in 1801. James Monroe moved the ceremony outside to the east front of the Capitol in 1817.

It remained there until 1981, when Ronald Reagan switched it to the Capitol's west front as a giant stage prop for his inauguration.

Sub-zero temperatures drove Reagan inside the Capitol building in 1985 for his second oath-taking and forced the cancellation of his parade, disappointing 12,000 marchers, 66 floats and 57 bands.

Thomas Jefferson and Andrew Jackson showed their common touch by eschewing carriages and walking up to Capitol Hill to be sworn in. Jimmy Carter delighted the crowd and horrified the Secret Service by leaving his armored limousine after the swearing in, and strolling down Pennsylvania Avenue with his wife and children to the White House. Both Bushes and the Clintons walked part of the way at their inaugurals as well. 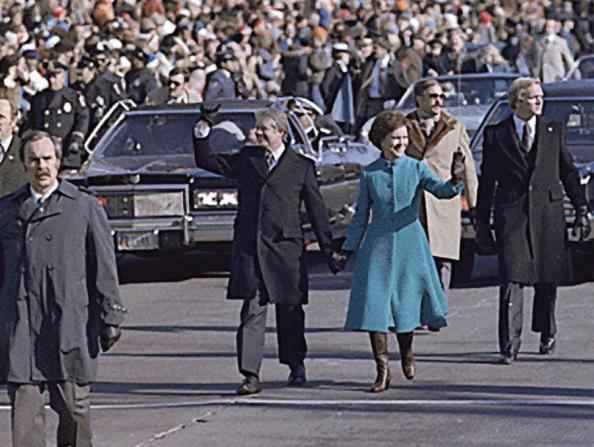 Until Benjamin Harrison's 1889 inauguration, the parades usually moved up the hill to the Capitol. Since then, they've flowed down the hill past the White House reviewing stand. Some grander parades lasted well into darkness.

After his 1829 parade, Andrew Jackson opened the White House to thousands of his hungry and thirsty followers, who tracked in mud, broke windows and wrecked furniture. After Lincoln's second inaugural in 1865, unruly guests stole silver and draperies.

There've been awkward moments between incoming and outgoing presidents. Adams boycotted Jefferson's inauguration in 1801. Ulysses Grant refused to ride in the same carriage as Andrew Johnson in 1869. Herbert Hoover and Franklin D. Roosevelt drove to the Capitol in chilly silence in 1933.

Not all inaugurals have been joyous occasions. Andrew Johnson took the oath in his boarding house the day after Lincoln's assassination in April 1865. In 1901, Theodore Roosevelt was sworn in in Buffalo, N.Y., where William McKinley had died earlier that day.

A grim-faced Lyndon Johnson was sworn in aboard Air Force One on the day John F. Kennedy was shot in Dallas. Gerald Ford took the oath in the East Room of the White House after Richard Nixon resigned in 1974.

Ever since Washington, most presidents have launched their term with a formal address, usually calling for national reconciliation and setting out their vision for the future.

Washington and Adams gave their inaugural speeches in person. Jefferson and a century of his successors sent theirs to Congress in writing. Wilson renewed the personal address in 1913.

Some inaugural addresses have etched lines in the national memory:

At Kennedy's snow-swept inaugural in 1961, the glare of the sun and a stiff breeze kept Robert Frost from reading a poem he had written for the occasion. Vice President Lyndon Johnson tried to shade the lectern with his top hat, but the 86-year-old poet protested "I can't see in this light." Instead, he recited from memory one of his earlier poems, "The Gift Outright."

William Henry Harrison's 1841 address -- an hour and 40 minutes long, delivered without hat or coat on a cold, damp day -- turned tragic. The 68-year-old Harrison developed pneumonia and died a month later. His vice president, John Tyler, was sworn in at his hotel and never gave an inaugural address.

The most recent inaugural, George Bush's second, was marred by scuffles with angry protestors. Cries of "warmonger" and "impeach Bush" clashed with chants of "USA" and "support our troops" as 13,000 police and soldiers stood guard.

This year, Obama's whistle-stop train ride from Philadelphia to Washington, picking up Vice President-elect Joseph Biden on the way, follows a long line of travels to the capital by incoming presidents. George Washingon rode his horse and carriage from his beloved home at Mount Vernon to New York. Lincoln whistle-stopped from Springfield, the Illinois capital where Obama declared his candidacy Feb. 10, 2007.

To read the inaugural addresses of former presidents: www.homeofheroes.com/presidents/inaugural/index.html 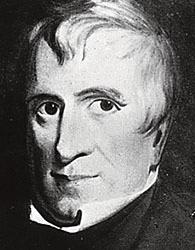 Q: Who gave the first inaugural address to be broadcast live on the Internet?

Q: Who gave an inaugural address one year, then gave the one AFTER the next president?

Grover Cleveland gave his second inaugural address on March 4, 1893. To date, this is the only time a president hasbeen elected, lost to his opponent in the next election cycle, then been elected again to serve a second term.