Obama: A Leading Man for the Dramas Ahead 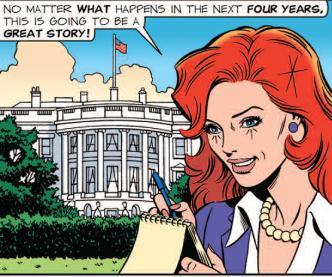 When President Obama takes his hand off the Bible and walks to the Capitol lectern, he carries real power in his pocket, maybe more than any president since FDR, and some of it he has earned and some is a gift.

Some is due to that phenomenal marathon run of his and the show of discipline and steady good humor and serious resolve, which won him support beyond the usual precincts, and then too there is his graceful command of American language that we dream of in a president.

And the country's great weariness of his predecessor creates a big wave for the new man to ride in on, and the financial crash gives him a drama to grapple with and show his mettle.

The world is watching. The country is prepared for leadership. Good things are expected.

What is so refreshing today is how America has come up with a hero at a time when we very much wanted one.

For some of us, it's been a long time since we had a hero and we're a little dumbfounded by how much we like this one. A genuine hero who rose on the strength of his own gifts and ambition and now is poised to lead from the center and not harangue us from out in left field. There were others whom the media marked as Contenders and who raised pots of money and hired consultants and speechwriters and hairstylists, and the voters took a look and walked away. Obama is the one who looked better and better the more you heard him.

He comes along as the great hairy-legged Internet gains dominance over the old genteel media. The old uncle anchorman (Chet, Walter, Harry, Dan) is gone forever and we become a nation of surfers and foragers of scraps of news among the driftage.

It's as if the teacher left the room and the dopiest students are dominant. They always resented being lectured about global warming or the war in Iraq or torture, and they were thrilled when the guy with the tie disappeared, and they could goof off. Election coverage this year was notable for its irrelevance, but then it was all over, and reality appeared, in the form of vote tallies, and then came the magnificent moment that needed no comment, no voice-over analysis, when that family emerged from behind the curtain and walked down the long blue runway in Grant Park, and a wave of warm feeling came over us, and we were done with the flummery and balloon juice and the country saw its new president, a serious man for serious times, a good man who is all of a piece and all of him American.

The country wants authenticity in its heroes. We're a nation of comedians, and we can smell hypocrisy and selling points, and we are deeply suspicious of marketing. Try to market us a hero and we will deface his picture, black out his teeth, draw stuff coming out of his nose.

This man came through the hazing unmarked. He had given us himself in a memoir, and then in patient navigation of the electoral backwaters, and he came through it somehow enlarged, and his conduct post-election has only enlarged him further.

He now seems to stand about 10 feet tall and is likely to grow some more in office. It is a rare moment in our history, this feeling of union and solidarity around a new leader, and we should savor the day. May the Lord heal our suspicious minds and restore us to our senses.

There is work to be done and it is time to do it.