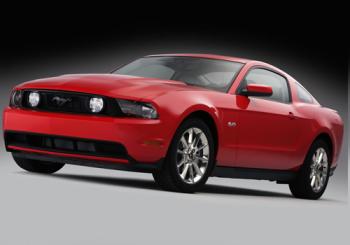 The Detroit auto show was filled with hybrids and electrics as auto manufacturers tried to drum up support for government-mandated high-mileage vehicles.

But that doesn't mean the muscle car will go the way of the passenger pigeon.

The 2011 Mustang GT introduced at the North American International Auto Show featured a thoroughly modern 5-liter V-8 engine that will have all the niceties of twin independent-variable valve timing for its four-valve configuration. This will allow it to deliver 412 horsepower and 390 foot-pounds of torque.

A variety of techniques will mean the new V-8 can escape the gas guzzler tag. In the Mustang, it will offer fuel economy estimated to be 25 miles per gallon on the highway.

It's hard to find space to spell out all the technical advances included in the new V-8, but it'll suffice to say that it includes all-new aluminum four-valve-per-cylinder heads with a compact valvetrain layout that leaves more room for high-flow ports, beefier head bolts and main bearings, and an aluminum block developed for optimized windage and oil drainback under lateral conditions and high RPM -- say, something you might encounter on the racetrack.

The increased capacity and baffling of the deep-sump oil pan supplements that ability, while tubular exhaust headers were developed to maximize exhaust pulse separation and improve flow.

While Mustang fanatics are likely thrilled with the new engine, the 2011 Mustang GT will offer other functional improvements as well.

As you might expect, the Mustang GT will get some unique appearance items as well, among them the 5.0 fender badges and a new engine cover. Three new colors for 2011 are Yellow Blaze Tri-Coat, Race Red and Ingot Silver.