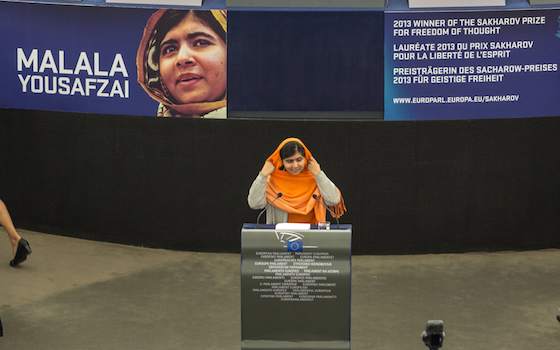 The Nigerian schoolgirls will never receive the global hero status of Malala. There are too many of them. They are nameless and faceless, with at least 270 missing, not counting the 50 lucky ones who escaped their militant Islamist captors.

But they are Malala, just girls from a different country and continent.

, recall, is the Pakistani girl who was shot in the head by the Taliban for speaking valiantly for the education of girls. Her delicate face is as recognizable as that of many world leaders.

In contrast, many fear all of the Nigerian girls will never be found. If that comes true, it will partly be due to the lethargic response to their capture. Many have already been raped and/or sent across the border into Chad or Cameroon.

In mid-April, the girls were herded from their boarding school, forced into trucks and driven into the forest.

The kidnappers are an Islamist militia known as Boko Haram, which translates as "Western education is sinful" in the Nigerian language Hausa. The girls, ranging in age from 16-18, were targeted for participating in state-run, non-Qur'anic education. Boko Haram's seemingly deranged leader has bragged that the girls are now chattel, bridal slaves.

The kidnapped girls are Christian and Muslim. Together with their families, they bravely disregarded militant Islamist lunacy. Their school had been closed for a month, due to the threats of violence. But it reopened so they could take final exams.

As if the attack was not outrageous enough, equally disgusting has been the Nigerian government's blasé reaction. The girls' parents, not the Nigerian military, tried to chase the rebels, tracking them through the forest.

The disturbing lag time in taking action raises serious questions about Nigeria's government and political stability. But it forces us to confront the grim reality that women's rights still don't count for much in the world.

Yes, there has been a global outbreak of shock and horror. And women throughout Nigeria and across the world are expressing their solidarity under the Twitter hashtag #BringBackOurGirls.

And the U.S., and China have promised to help. That may come in the form of intelligence, diplomatic activity and merely putting pressure on Nigerian President , whose deplorably ineffective response so far has made the crisis worse.

American citizens can urge their representatives and senators to pass the International Violence Against Women Act. The act would make responding to gender-based violence a priority in all U.S. government programming overseas. Had the law been in place, it would have aided in pressuring the Nigerian government to act even sooner against Boko Haram, for this was not the group's first attack on schools. In addition, the act would support the sort of in-country programs that combat poverty and public health issues that too often disrupt the education of girls.

Governments also need to make serious commitments to shutting down the global marketplace slavery and human trafficking. We also cannot turn a blind eye to the all-too-common human rights violations on the part of friendly governments, which often create the conditions in which extremists such as Boko Haram thrive.

Nigeria's government is notoriously corrupt and the country is deeply divided by wealth and religion, and it's easy to see how insurgencies -- or murderous outlawry, at any rate -- gain momentum.

Attitudes hostile to women and girls don't develop in a vacuum. Nigeria's crisis is a part of on-going thread of anti-Western sentiment. Like the Taliban, Boko Haram considers secular education for girls a direct threat to its conception of a godly society.

But no cultural or religious sensitivity need be extended to the men who hold these girls hostage. Boko Haram does not represent the people of the region in which it operates. The group's medieval conception of women is totally unacceptable and can have no place in modern Nigeria.